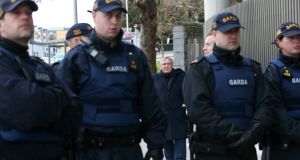 The father of the late David Byrne, James, is seen behind a line of gardaí at the Special Criminal Court after the State dropped the charges against the man accused of killing his son. Photograph: Laura Hutton/The Irish Times

They’re there most days now, not to watch the school but to keep an eye on the house across the road on Champions Avenue where Patrick Hutch jnr and his family live.

There was little for the two gardaí to do yesterday except take in the sun and chat to passing locals, most of whom seemed happy with their presence.

Concerns the Kinahan gang might target the house or one of its occupants following the collapse on Wednesday of Hutch’s trial for the murder of David Byrne in an attack at the Regency Hotel in 2016 appeared groundless.

Local resident Lisa was walking to her home just off Sean McDermott Street having just dropped her son off at school. “He was saying to me there would be killings today so I was a bit worried. But you just get on with it, don’t you. It seems quiet enough anyway.”

'I would be a bit concerned that this will throw fuel on the fire, in a situation that was beginning to fizzle out in a lot of ways'

Lisa knew Martin O’Rourke, the sixth victim of the Hutch-Kinahan feud, who was shot dead on Sheriff Street in April 2016 in a case of mistaken identity.

She said she has been impressed with the Garda response since, even that of what she calls the “heavies”, the machine-gun-wielding members of the Armed Support Unit who patrol the streets and man roadblocks.

“My young lad gets very excited by them. I think it’s like living in Belfast or something with the soldiers everywhere, but I’d rather they were there, if [you] know what I mean.”

Eddie D’Arcy, who runs an inner-city drugs project, believes tensions have increased following the collapse of the Regency Hotel case, and that associates of the Kinahan group now feel the other side has one up on them.

“I would be a bit concerned that this will throw fuel on the fire, in a situation that was beginning to fizzle out in a lot of ways.”

If the Kinahans feel they have somehow lost face because of the collapse of the trial, they may carry out a killing in a show of strength. The intense public scrutiny and the lack of public information on the exact reasons for the case’s collapse aren’t helping, D’Arcy says.

The information vacuum surrounding the death of the lead investigator in the case, Det Supt Colm Fox, and the notes he left behind means conspiracy theories are able to take root in the community, D’Arcy says.

“Some on the Kinahan side of the track are saying the guards are favouring the Hutch side, things like that.”

Things were “a bit tense” after the court hearing on Wednesday, local councillor Gary Gannon says, “but nothing out of the ordinary”.

In relation to residents on Sheriff Street, “people were just getting on with business,” he said.

“There are conversations in the pubs and people might be watching over their shoulders when they go into the shop but that’s normal. That didn’t increase or decrease yesterday.”

The Garda presence on the streets was minimal. Its tactics have changed since Operation Hybrid was launched more than two years ago to combat the feud. The high-visibility armed patrols are now mostly gone, replaced with targeted operations based on specific information about a threat.

'I hate that it’s normal now to have the armed gardaí. Would you like to see your child going to school walking past Garda armed response every day?'

Part of the reason for this is Hybrid has been mostly successful in calming the feud. There hasn’t been a murder in the north inner city since Jason “Buda” Molyneux was shot dead in North Strand in January 2018 – there is still some doubt about whether that was related to the feud or not.

There are also resource pressures. Smaller but equally deadly feuds in Ballymun, Finglas and elsewhere mean the resources have been stretched thin.

“I have seen a wind-down in police activity. Some of the roadblocks have been moved anyway,” says D’Arcy.

A Garda spokesman said yesterday the force was aware of the collapsed trial but there was no information about any heightened threat as a result, meaning no additional armed response units were deployed. However, more uniformed gardaí were put on the street.

“Really this place should be more flooded with gardaí. I know people think we are but we’re not,” says local Marie Metcalfe, who sits on the North East Inner City Community Policing Forum.

“I hate that it’s normal now to have the armed gardaí. Would you like to see your child going to school walking past Garda armed response every day? But we need it until this is under control.”

There appears to be a consensus that the biggest problem facing the area now isn’t the threat of further shootings (“the fireworks”, as Gannon calls them) but the low-level feud-related violence which doesn’t make the headlines and often isn’t even reported to gardaí.

Members and associates of the Hutch and Kinahan factions still live side by side in the north inner city. There has been a series of firebomb and pipe-bomb attacks in the area in recent months, along with at least half a dozen incidents of bullets being fired in the air or through windows in acts of intimidation.

“We’re nearly learning to live with it now. You expect these things to happen and we have no way out of this until it stops, if it ever stops,” says Metcalfe.

The feud murders brought political and public pressure on the Garda to do something. Now that the killings have largely stopped, she worries the ongoing violence has reached “acceptable levels” and will be allowed continue.

“If this was any other part of Dublin it wouldn’t be allowed happen.”