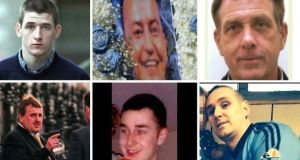 September 24th, 2015, Spain
Gary Hutch (34) was gunned down beside a swimming pool in a communal area of the Angel de Miraflores apartments complex, near Marbella on the Costa del Sol on the morning of Thursday, September 24th, 2015.

He had previously tried to shoot dead a member of the Kinahan family. Hutch’s killing began what would become known as the Kinahan-Hutch feud.

December 30th, 2015, Blackhorse Avenue, Dublin
Darren Kearns (34), had just left the Phoenix Chinese restaurant above Cumiskey’s pub on Blackhorse Avenue, close to the Cabra Gate of the Phoenix Park, at about 5.40pm on Wednesday, December 30th, when he was shot dead as his wife looked on. Gardaí believe the Kinahan gang blamed him for a botched shooting on its gang members in Dublin a month earlier.

February 5th, 2016, Regency Hotel, Dublin
Kinahan gang member David Byrne, a 34-year-old father-of-two from Crumlin. He was killed when he and a group of men aligned to that gang were attacked by five gunmen at a boxing tournament weigh-in in Drumcondra’s Regency Hotel, Dublin.

February 8th, 2016, Poplar Row, Dublin
Eddie Hutch snr, a 59-year-old father-of-five, was shot dead at his home on Poplar Row in Dublin’s north inner city just days after the Regency Hotel attack. He was an uncle of Gary Hutch and targeted because he was a member of the Hutch family.

March 23rd, 2016, Ratoath, Co Meath
He was shot dead, apparently, because of his association with fellow veteran criminal Gerry Hutch. Duggan was so heavily involved in cigarette smuggling he became known as Mr Kingsize. He was gunned down outside his home on a housing estate in Ratoath, Co Meath.

April 25th, 2016, Summerhill Parade, Dublin
Michael Barr (35) is believed to have been killed by Kinahan gunmen looking to shoot a Hutch family member in the pub at the time. While Barr worked in the pub, he was not the prime target.

May 24th, 2016, North Cumberland Street, Dublin
Gareth Hutch died after being shot several times by two attackers in a car park near his home. He was a cousin of the late Gary Hutch and also the nephew of murdered taxi driver Eddie Hutch.

July 1st, 2016, Bridgefoot St, Dublin 8
Convicted armed robber and drug dealer David Douglas (54) was shot dead outside the shop he ran with his wife on Bridgefoot Street, off Thomas St, in Dublin 8. Along with Darren Kearns he was blamed by the Kinahan gang for a botched gun attack on its members in Dublin in November, 2015.

August 17th, 2016, Majorca
Dublin City Council worker Trevor O’Neill was shot dead in Majorca on a family holiday with his wife and young children after being mistaken for a member of the Hutch family.

December 22nd, 2016, Ronanstown, Dublin
Noel Kirwan, a close associate of Gerry “The Monk” Hutch, was shot dead in front of his partner outside his home in west Dublin. Gardaí believe his relationship with the Hutch family, with whom he had grown up, was the motive for his murder.

December 1st, 2017, Dunboyne, Co Meath
The son of Noel Kirwan, he was shot dead by the Kinahan gang 12 months earlier. Kane McCormack’s remains were found in a field in Co Meath. Gardaí believe he was killed because the Kinahan gang feared he may have taken revenge on its members for his father’s murder.

January 20th, 2018, Cloverhill, west Dublin
The 27-year-old father of two was ambushed as he sat in a car in a halting site beside Cloverhill Prison. He was the fourth member of the Hutch family to be killed since the Kinahan-Hutch feud began.

January 30th, 2018,  North Strand, Dublin 1
The father of one, who had 122 previous convictions, was shot dead at James Larkin House 10 days after the murder of his friend, Derek Coakley Hutch. He was shot six times in the head and chest by a lone gunman.

December 22nd, 2018, Clonsilla, Dublin 15
Fowler (34) was shot dead as he arrived home at Blakestown Cottages. Two gunmen shot him in the head. Their escape car was found burned out nearby. Gardaí believe he may have provided logistical support to an Estonian hitman hired by the Kinahan faction.