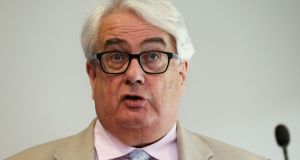 The Chief Justice, Frank Clarke, has written “a strongly worded letter” to Minister for Justice Charlie Flanagan outlining his frustration at having to read about Government proposals to reduce compensation payouts in a newspaper before being informed personally.

On Thursday The Irish Times published details of a letter from Mr Flanagan to the Chief Justice suggesting he establish a judicial committee aimed at rapidly reducing awards for soft-tissue injuries such as whiplash.

Chief Justice Clarke only received the letter, as an attachment to an email, on Thursday afternoon and had not been briefed on its contents beforehand. It is understood he was irritated he had to first read about the proposals in Thursday morning’s newspaper.

A Courts Service spokesman said, in response, the Chief Justice has written “a strongly worded letter” to Mr Flanagan which was delivered by courier to the Department of Justice on Thursday afternoon.

A senior source with sight of the letter said it shows the judge to be “deeply unhappy” with the sequence of events.

There is also frustration among the judiciary at the Government’s forceful approach to the compensation issue, with some senior judges worried its proposals could affect judicial independence.

In his letter, Mr Flanagan proposed the Chief Justice form a committee composed of judges with experience in personal injury cases, court and Department of Justice staff, and representatives of the Personal Injuries Assessment Board (PIAB).

As a matter of priority the committee would set new guidelines for payouts in soft-tissue personal injury cases such as those involving whiplash.

The Government has signalled it wants to reduce the amount of money being awarded by judges in such cases after a report last September found payouts were up to five times those awarded in the UK.

It had previously been agreed such functions would come under the remit of the proposed Judicial Council.

However, as the legislation to establish the council is still languishing in the Oireachtas, the Government has proposed an interim committee be set up as a stop-gap measure to handle what it sees as the urgent issue of high compensation payouts.

Some senior judges were unhappy with the idea of an interim committee featuring non-judicial members such as department and PIAB staff, especially since the committee would not be on a legislative footing.

Judges have voiced concerns that it would undermine the independence of the judiciary.

There has also been consternation among some judges at the comments of Minister of State in the Department of Finance Michael D’Arcy, who has been the main Government proponent of urgently reducing court payouts.

Some senior judges are especially aggrieved at a radio interview Mr D’Arcy gave on Tuesday in which he complained about “bananas, off-the-wall amounts” that “some members of the judiciary” are awarding in cases.

Mr D’Arcy’s comment, “I am not happy with the judiciary continuing the way they do. I am not prepared to allow it to continue”, was seen by several as a perceived attack on the notion of judicial independence.

“This isn’t Poland, ” one judge is understood to have commented this week, a reference to the ongoing encroachment on judicial independence by the Polish government.

Another said such comments lessen the possibility of the judiciary co-operating with the Government in setting up an interim council.

The Department of Justice declined to comment on Thursday except to say the Government is anxious to progress the recommendations of the Personal Injuries Commission to reduce compensation payouts.

Meanwhile, the Law Society, which represents solicitors, called proposals for an interim committee a “knee-jerk reaction which could have unintended and unforeseen negative consequences”.

It said the proposals could have consequences for the separation of powers, especially because, as the State is a defendant in many compensation claims, “it cannot be impartial when assessing the appropriate level of damages”.

The Law Society said setting guidelines for damages is a job for the Judicial Council, as recommended by the Personal Injuries Commission.