Prisons struggling to cope with 20% jump in female inmates 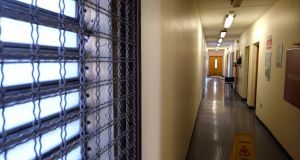 The Irish Prison Service is struggling to find beds for female inmates amid a large rise in the number of women being sent to prison.

The number of women in custody has been rising steadily since 2015 and has increased 20 per cent in the past 24 months. This is double the rise in the general prison population during the same period.

On Friday there were 192 women in the prison system. Of these, 166 were in custody with the rest on some form of temporary release. On the same date two years ago there were 164 in the system with 138 of those in custody.

The State’s only two female prisons, the Dóchas Centre in Dublin and the women’s section of Limerick Prison, are both consistently severely over capacity.

As of Friday, the State’s capacity for female inmates was at 127 per cent. At times this year it has been much higher; Limerick Prison reached 196 per cent capacity at one stage while the Dóchas Centre was as high as 138 per cent capacity.

“You will appreciate that prison governors are required by law to accept all prisoners into their custody who have been committed to prison by the courts. The Irish Prison Service therefore has no control over the numbers committed to custody at any given time,” a prison service spokesman said.

The service said in response to the rise it was implementing a “prison population management plan”, which would bring an additional 200 male and female beds into the system. Part of this would involve a “cell audit”, a review of all cells currently out of operation to see which ones could be put into service.

A step-down facility for female prisoners at the end of their sentences is to be expanded in 2020 from seven to 10 beds.

The planned redevelopment and expansion of Limerick Prison will have the biggest impact on the overcrowding problem, but it is not due to be completed until 2021 at the earliest.

The plan is for a new stand-alone facility catering for 50 female prisoners and a new cell block for 125 male prisoners.

“Construction on the project is due to be completed in February 2021, followed by a period of snagging, security work and fit-out before the building becomes operational as a prison,” the service said.

It said it was also working with other criminal justice agencies on the “criminal justice operational hub”, a project to improve data analysis across the justice system.

“This will enable a better understanding of the impact of changes in volumes and flow at each stage of the system and will contribute to better policy making and practice in the sector.”

One reason for the large rise in the female prison population was the concurrent increase in the use of short prison sentences, said Fíona Ní Chinnéide, director of the Irish Penal Reform Trust.

Last year there was a 34 per cent increase in the number of sentences lasting three months or less.

“Women tend to be imprisoned for short sentences for repeat low-level offending,” she said.

Ms Ní Chinnéide said there was also a suspicion that judges were increasingly imposing custodial sentences on female offenders because their lives were so chaotic on the outside due to housing, drug and mental health issues.