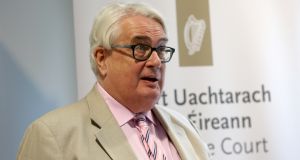 Between 33 and 40 per cent of the cases being heard by the Irish Supreme Court have a significant European Union law element, Chief Justice, Frank Clarke said on Wednesday night. File photograph: Laura Hutton/The Irish Times

The Chief Justice has said a recent run of environmental cases in the Supreme Court had led to jokes it was becoming the protector of rare bird species.

Addressing the relationship of European Union law to the Irish courts, Mr Justice Frank Clarke made light of recent litigation involving the habitat of the Hen Harrier.

“One of my colleagues says that the Supreme Court is really the court for the protection of the Hen Harrier,” he said.

“Another colleague pointed out . . . that the prey of the Hen Harrier is the Meadow Pipit and complained bitterly that while there was great protection in European Union law of the Hen Harrier, who was looking after the interests of the poor Meadow Pippit who was being eaten to a much greater extent?”

Mr Justice Clarke, remarking on the need for humour among judges, was speaking at the launch of the book Constitutional Law of the EU’s Common Foreign and Security Policy by associate professor of law Dr Graham Butler in Dublin on Wednesday.

He said that since the creation of the Court of Appeal, the Supreme Court had been dealing with cases of general public importance, often “heavily influenced by European law”, including European arrest warrants, immigration and environmental issues.

“I would genuinely think it’s now the case that perhaps somewhere between 33 and 40 per cent of the cases being heard by the Irish Supreme Court have a significant European Union law element,” he said.

Ireland ‘not at all happy’ about ‘disproportionate’ fish quota loss - Minister 13:45
Two charged with trying to murder man in Dublin shooting last year 13:42
Weekend weather warning issued as snow and freezing conditions forecast 13:42
Belmullet GP with Covid-19 speaks of ‘fear and dread’ in community as cases surge 13:17
Covid-19: Current travel rules ‘will not stop’ all cases coming into State – Glynn 13:14