Over half of people believe force is well managed, survey on gardaí finds 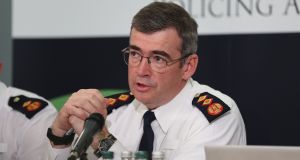 Public opinion on the management of the Garda has improved significantly since the appointment of Drew Harris as commissioner a year ago, according to a survey.

Fifty five per cent of respondents to the Garda-commissioned Public Attitudes survey said they believed the force was well managed when asked in the second quarter of 2019. This is up from 43 per cent from the same period in 2018, just before Mr Harris was appointed.

Mr Harris, who was formerly deputy chief constable of the Police Service of Northern Ireland, was appointed in September 2018. His tenure to date has been characterised by an increased focus on discipline and anti-corruption measures as well as a drive to civilianise the force and return gardaí to front-line policing duties.

In other respects the Public Attitudes study, which surveyed 1,500 people, is a mixed bag for gardaí.

There has been an eight per cent rise in the number of people who consider crime to be either “serious” or “very serious”, up from 71 per cent in the first quarter of 2019 to 79 per cent in quarter two.

There was a three per cent increased in people who believe crime in their local area was serious or very serious, a figure which now stands at 19 per cent.

However, the survey’s authors cautioned against over interpretation of this figure due to the small sample size (79 respondents reported as victims within the previous 12 months).

Sixty-four per cent said their fear of crime had no impact on their quality of life, a figure which has fluctuated between 60 per cent and 66 per cent since the same period in 2018.

Almost a quarter stated fear of crime reduced quality of life a little, 10 per cent reported a moderate reduction and three per cent said it had significantly or greatly reduced their quality of life.

Figures for trust in the Garda (45 per cent) and satisfaction (80 per cent) were broadly in line with previous surveys.

A large majority of people (93 per cent) believed the Garda to be “friendly or helpful” but only 43 per cent rated it as providing a “world-class police service”. Both figures are similar to previous years.

The survey, which is repeated four times a year, was carried out by Amárach Research and has a margin of error of 2.53 per cent.