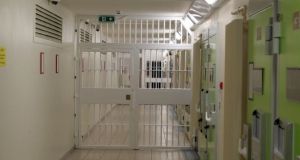 There have now been Covid-19 cases in prisoners in four facilities around the country. File photograph: Collins Dublin

An inmate in Limerick Prison has tested positive for Covid-19.

The prisoner has been isolated and all 200 of the jail’s inmates are to be tested as a precaution, along with staff.

There have now been Covid-19 cases in prisoners in four facilities around the country.

In Limerick, the male prisoner, who was housed in the facility’s D Division, has been in the general prison population for several weeks, suggesting he contracted the virus within the facility.

It is understood the prison’s infection control team has advised management an outbreak is possible but that they are confident they contained the inmate in time to prevent further spread.

The Irish Prison Service (IPS) said it is working closely with the HSE and contact tracing is ongoing. Arrangements for the testing of all prisoners in D Division have already been made.

“An Outbreak Control Team (OCT) meeting has taken place to review the cases and agree the appropriate actions to be taken to mitigate against further possible spread of the disease within the prison,” the IPS said in a statement.

Last Friday it was announced five prisoners had tested positive for the virus in the country’s largest prison, the Midlands Prison, which holds more than 800 inmates.

It is understood a further prisoner there tested positive on Friday. Eleven staff have also been infected, with some 30 others self-isolating.

The Midlands outbreak was the first time the virus had been transmitted within the prison population. There had been five other confirmed prisoner cases but prison authorities are confident those inmates contracted the disease before entering prison.

Earlier this week the Prison Officers Association (POA) criticised what it said was a rush towards easing Covid-19 restrictions within the country’s 13 facilities.

He also criticised the decision to reopen gyms in prisons “when gyms in the community remain closed”.

The IPS responded that infection control remains a priority but that it is also “mindful of the need to find a balanced prison regime that provides safe controls against the virus but also allows for the provision of important regimes and services to prisoners”.

It is understood the Inspector of Prisons has also called for inmates to be given more out of cell time amid concerns about their mental health.

The Irish Penal Reform Trust (IPRT) said it is similarly worried about prisoner’s mental health “and supports all efforts by prison management to safely relax the harsh restrictions and tough living conditions for prisoners due to the pandemic”.

Covid-19 outbreaks in the prison system are seen as particularly dangerous due to inmates’ close living conditions and the prevalence of immunosuppressive medical conditions among inmates.