Officers hauled away 10 motorcycles, three cars, €4,000 in cash and made two arrests 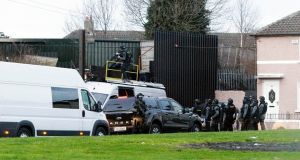 Members of the Chosen Few Motorcycle Club usually use a remote control to open the massive front gate of their compound on Windmill Road in Crumlin. This week, gardaí, when carrying out an early morning raid, used a JCB.

As one Emergency Response Unit (ERU) member drove the digger through the steel gate early on Tuesday, other gardaí used a ladder to climb the rear fence before cutting the razor wire to access the half-acre compound.

The power had been cut, rendering useless the spotlights and security cameras dotted around compound, and the Garda helicopter kept watch on the operation from above.

This was more than just a show of force by the Garda. There was evidence of members of the club having access to weapons. Recent raids uncovered dozens of knives, swords and imitation guns along with drugs and €135,000 in cash.

In 1996, a club member was convicted of possessing a Mauser pistol in the compound.

After the ERU secured the area, Criminal Assets Bureau (Cab) officers moved in along with the Customs’ dog unit. No drugs or weapons were found this time. Instead, Cab officers hauled away 10 motorcycles, three cars and €4,000 in cash. They also arrested two men on suspicion of money laundering.

Many, but not all “one-percenter” motorcycle gangs such as the Bandidos and Hells Angels have long been associated with organised crime in the United States and continental Europe (the term “one percenter” is a reference to the idea that most motorcycle clubs are law abiding but 1 per cent subscribe to the image of “outlaws”). In the Netherlands, the Hells Angels dominate much of the drug trade, leading to its prohibition by the Dutch courts last year.

The situation is different in Ireland. Most motorcycle clubs, including one-percenters, have no association with crime. Others have only tangential connections, serving as occasional hired muscle in return for modest payments.

The chief function of some of these outlaw bike gangs seems to be feuding with rivals. In 2015, Alan “Cookie” McNamara, a member of the Caballero Motorcycle Club, murdered Andrew O’Donoghue of the Road Tramps in Limerick. The murder was revenge for an attack on McNamara by Road Tramps members – in which his waistcoat was stolen, a grave insult in the biker world.

In recognition of McNamara’s deed, the Limerick Caballeros were upgraded to the status of full members of the Bandidos, an international motorcycle gang active in criminality in dozens of countries.

The Chosen Few differ from these other clubs. While some of its members have deep connections to organised crime groups, including the Kinahan and the Byrne gangs, they operate largely under the radar.

Club members’ connection to the Byrnes, which represents Kinahan interests in Ireland, is unsurprising. The compound is a five-minute walk from gang leader Liam Byrne’s family home and he is known to have frequented the premises over the years.

In 2016, members of the Chosen Few provided a motorcycle escort for the funeral of Byrne’s brother, David, who was murdered in the Regency Hotel gun attack.

According to security sources, the club also works closely with the Grendon gang, which has taken over much of the Dublin drug trade from the Byrnes in recent years. The Cab is investigating some members of the Chosen Few for intimidation, extortion and the laundering of money through the sale of vehicles on behalf on these gangs.

The Chosen Few has been operating in various guises out of Crumlin since at least the mid-1990s. Aside from its members’ appearance at Byrne’s funeral, it tends to shun publicity.

“They tend to pop up occasionally and then go quiet for a long time,” one security source said.

The club has gone through several name changes over the years. In 1994, when it was known as The Family, member Dermot Griffin, was accused of the gun murder of a man at a biker event in Wicklow. Griffin was acquitted of murder but convicted of possessing a handgun at the Crumlin compound. He was later jailed for 14 years for his role in a drugs gang.

In 2000, Paul Mackey, who four years previously was listed as an owner of the club, was fined for damaging a Garda car with a knife in Co Louth.

Unusually for a so-called “outlaw” motorcycle club, the Chosen Few opted to register its name with the Companies Office in 1996, although official records show no business activity since.

A seemingly defunct website dating to 2003 details the club’s origins with the Road Rockers, a long-established mainstream motorcycle club. Some members broke off and adopted the Chosen Few name, which is used by many motorcycle clubs worldwide, some of which have no connection with each other. Attempts to contact the Chosen Few in Dublin were unsuccessful.

The site also features Chosen Few merchandise and photographs of members partying in the clubhouse in the Crumlin compound and on visits abroad to friendly clubs.

It’s important to note that some Chosen Few members, perhaps a majority, have little to do with criminality and are simply motorcycle enthusiasts.

“Some are just lads who like the bikes and the image,” said one local garda.

Other members, however, engage in anti-social behaviour, drug dealing, money laundering and intimidation, informed sources say. Some of this is on behalf of organised crime groups, some is purely for their own benefit.

Having had significant success in stripping assets from the Byrne organised crime group, the Cab is now focusing on the Grendons and with them, the Chosen Few.

Sources say the seizure of the vehicles on Tuesday was just the first step. The main goal is to use proceeds of crime legislation to seize the compound and dismantle it.

Such a move would be welcomed by locals. “If it stops those f**king bikes going in and out I’ll be happy,” said one local who declined to be named over safety fears.

Local representatives have already tried, without success, to do something about the compound which sits behind a derelict house on a quiet side road in the Dublin suburb.

Two years ago, councillor Pat Dunne asked Dublin City Council to examine whether it adhered to planning regulations, particularly the hoarding which surrounds it.

“The reason I put in that request was because it was reasonably clear that the extent of the hoarding is to try and hide something,” he said. “I never heard anything back.”

A council spokeswoman said there is no live enforcement file on the property.

Seizing the compound may be easier said than done, not least because it is not clear who its owners are. The compound does not appear to have a mortgage registered against it and the most recent land registry documents date from 1956. They assign ownership to a woman who, according to sources, has since died and never had any connection to crime or motorcycle clubs.

Dunne is adamant that if the premises is seized, the proceeds should go back into the local community. Several properties around Windmill Road connected to the Byrne gang have been seized by the Cab in recent years with the proceeds going into the State coffers.

There is currently no provision for proceeds of crime seized by the Cab to be reinvested back into the local community, something Dunne says must change.

In recent years he and others have been trying to get funding for the public swimming pool 10 doors up on Windmill Road to open for more than one day a week.

“Cab have recently sold two premises in the area. Could that money not be brought back into the area so we could have something like proper swimming hours?”