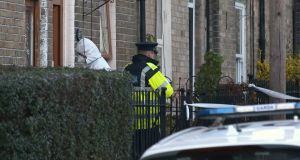 Gardaí at the scene on Auburn Street in Phibsborough, Dublin 7, this evening. Photograph: Collins

Gardaí have arrested a man for the suspected murder of another man in north Dublin on Friday.

The dead man, who was aged in his 40s, was found in a house on Auburn Street, near Phibsborough in Dublin.

Gardaí believe the victim had been in an altercation with a man well known to him and that this lead directly to his death.

That man, who is also aged in his 40s, was arrested on Friday evening on suspicion of murder and is currently being detained

detained in Mountjoy Garda Station under Section 4 of the Criminal Justice Act, 1984.

The man is understood to be cooperating with gardaí.A technical examination of the scene is currently underway by the Garda Technical Bureau. The victim’s body remains at the scene and the State Pathologist has been notified.

“A Garda family liaison officer has been appointed and is in contact with the family of the deceased,” the Garda said in a statement, adding that investigations are ongoing.

“Investigating Gardaí at Mountjoy are appealing to any person with any information into the death of this man to contact them at Mountjoy Garda Station 01-6668600, the Garda Confidential line 1800 666 111 or any Garda Station.”