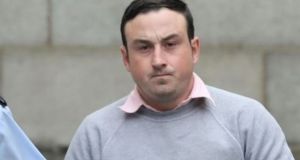 Aaron Brady, the convicted killer of Garda Adrian Donohoe, is one of two men arrested over recent days over allegations of witness intimidation related to the murder trial.

Bradywas last month sentenced to life imprisonment for the murder of the garda in Co Louth in 2013.

“Gardaí attached to the Garda National Bureau of Criminal Investigation (GNBCI) arrested a male in his 20s as part of the ongoing investigation regarding allegations of witness intimidation, perverting the course of justice and the unlawful use of mobile phones in the prison environment related to the recent criminal trial of DPP versus Aaron Brady,” a Garda spokesman said on Friday.

The man is being detained at Portlaoise Garda Station under Section 4 of the Criminal Justice Act, 1984.

On Thursday, a man in his 50s was arrested in relation to the investigation and was subsequently released. A file will be prepared for the Director of Public Prosecutions.

There have been seven arrests in this investigation.