Police attacked with petrol bombs at dissident parade in Derry 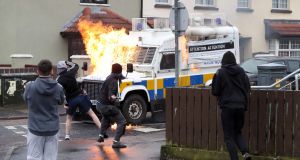 Youths attack PSNI vehicles as they try to prevent members of Derry 1916 Commemoration Committee from taking part in an unregistered parade in the the Creggan area of Derry, Northern Ireland. Photograph: Niall Carson/PA Wire

Petrol bombs have been thrown at police during an illegal dissident republican Easter parade in Derry.

Up to 50 youths, some wearing masks, repeatedly attacked Police Service of Northern Ireland (PSNI) Landrovers with petrol bombs, stones and sticks as the parade made its way through Creggan estate towards the City Cemetery.

About 200 people gathered in Central Drive on Monday afternoon for the dissident commemoration, organised by the Derry 1916 Commemoration Committee.

Crowds of young people were seen in the area carrying crates full of petrol bombs before the parade began.

A colour party of about 15 people, dressed in paramilitary-style uniforms and wearing berets and sunglasses, and with their faces partially covered, marched along Central Drive before making their way towards the City Cemetery.

They carried flags including the Tricolour, Starry Plough and flag of the Fianna, as well as flags representing the provinces of Ireland.

The PSNI warned those taking part that the parade was illegal, and they were liable to be arrested.

The procession stopped repeatedly as young people clashed with police, who retreated after a number of police vehicles were hit with petrol bombs.No injuries were reported.

Speakers paid tribute to republican volunteers as well as those killed in the 1916 Easter Rising.

“We are in the business of revolution,” the main speaker, former dissident republican prisoner Stephen Murney, told the crowd.

“Today Brexit is something that is often mentioned and talked about. Comrades, England’s difficulty is Ireland’s opportunity.

“If Brexit can weaken and damage the union, then as republican revolutionaries it is our duty to take advantage of it,” he said.

On Saturday, nine people were arrested for taking part in an illegal Easter commemoration parade in Lurgan, Co Armagh.

Referring to that episode, Mr Murney said at the Derry rally: “The entire republican community was enraged when we witnessed the vicious attack against the Republican Sinn Féin parade in Lurgan carried out by the RUC [Royal Ulster Constabulary].

“The entire colour party was arrested and participants injured by Stormont’s military wing.

“We utterly condemn the actions of the crown forces and we send solidarity and support to Republican Sinn Féin along with all those arrested and injured.”

“Everyone has a right to remember their dead in a respectful and dignified way,” she said on Twitter.

“Scenes from Derry today are very disturbing. Masked individuals, causing disturbance, youths throwing petrol bombs etc is far from dignified. Those responsible should be brought before the law,” she said.

According to the PSNI about seven petrol bombs were thrown at police, as well as items of masonry, and there was some damage to police vehicles.

There have been no arrests, and police have not received any reports of injuries.

PSNI Chief Insp Ivor Morton said police had attempted to engage with the organisers of the parade in a bid to facilitate their event “within the law”.

“The organisers declined to enter into any discussions with police on this matter,” he said.

“The organisers also stated in the run-up to today’s event they were informed by police the parade would be stopped and would not be allowed to go ahead.

“This was patently untrue and can only be viewed as an attempt by those behind the parade as a bid to raise tensions in the area.

“It is, therefore, regrettable that in raising those tensions a small number of people saw fit to attack police officers with petrol bombs in what was clearly a premeditated attack,” he said.

Chief Insp Morton said anybody who had been engaged in actions that were unlawful or detrimental to community safety would face consequences.

“Police will review all video footage collected today and will robustly pursue all possible inquiries to identify those involved and bring them before the courts,” he said.

He appealed to anyone with information to contact police at Strand Road police station in Derry, or via Crimestoppers on 0800 555 111.