NUJ, Amnesty International and DUP urge anyone with information to go to PSNI 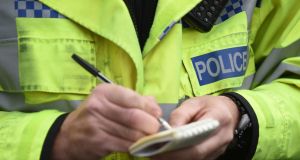 The life of a Belfast-based journalist has been threatened by loyalist paramilitaries. File photograph: Joe Giddens/PA Wire

The life of a Belfast-based journalist has been threatened by loyalist paramilitaries following media coverage of criminal activity in the North.

The National Union of Journalists (NUJ) and Amnesty International are among those to condemn the death threat from a section of the Ulster Defence Association (UDA) following stories about criminal activity associated with the paramilitary group.

Irish secretary of the NUJ Seamus Dooley said journalists should be able to work “without fear of intimidation or threat of violence” and called for the death threat against the reporter, who wishes to remain anonymous, to be lifted immediately.

“We understand this is a credible threat of violence, confirmed by the PSNI, and are therefore concerned for the safety of the journalist and those close to him,” he said.

“We urge those in positions of influence within the UDA to use their good offices to have the threat withdrawn.

“The NUJ has offered support and assistance to the journalist under threat and will always support members placed under threat.”

He added: “Respect for divergent views and challenging journalism is the hallmark of a democratic society and there is no place in our society for this type of intimidation, from any quarter.”

“Such threats are not merely an attack on one journalist, they are an attack on the freedom of the press in Northern Ireland,” he said.

“All over the world, journalists are arrested, threatened and killed for working in the frontline of defending freedom of expression.

“Guaranteeing freedom of expression must be a cornerstone of Northern Ireland as a peaceful and just society.”

DUP MP for East Belfast Gavin Robinson MP urged anyone with information to contact the police.

“Paramilitary activity and threats of this nature have absolutely no place in our society,” he said.

“To seek to cause fear is something that should belong to Northern Ireland’s past.

“Society upholds freedom of the press. Nobody should feel intimidated as a result of the work they do.

“Anyone involved in illegal activity must face the full weight of the law.

“People with information must bring that forward to the PSNI.”

Ms O’Neill took to Twitter to say: “This threat should be lifted immediately and all political leaders should show support for this journalist.

“There is no place for UDA or any paramilitary group in our society.”

A PSNI spokeswoman said: “We do not discuss the security of individuals and no inference should be drawn from this. However, if we receive information that a person’s life may be at risk we will inform them accordingly. We never ignore anything which may put an individual at risk.”