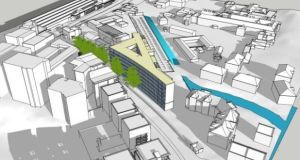 Plans for a new €80 million Garda command and control centre on Military Road in Dublin have been approved by the Office of Public Works (OPW) more than two years after they were first proposed.

The six-storey complex near Heuston Station and the Irish Museum of Modern Art (Imma) will replace the Garda premises on Harcourt Street, where its high-security and specialist operational units are based. The Garda has to leave Harcourt Street when its lease on the building expires in 2022.

The OPW has given the go-ahead for work to start on the two-acre site at the corner of St John’s Road and Military Road and has discounted “serious concerns” raised by Dublin City Council about transport plans for the development.

It said that, despite being beside a “major public transport hub” with main rail, Luas, bus and Dublin bike facilities, a “serious overprovision” of car parking spaces had been included in the plans, which “seriously conflicts” with council standards.

The plans would see vehicles accessing the car park from the narrow Military Road. While any vehicular access from Military Road would be “undesirable”, the council said, the quantum of parking proposed made it “unacceptable”.

The national cycle network plan required space for a “greenway” route linking to the Camac River through the site. No provision had been made for this route, despite being part of a statutory plan, the council said.

While no changes were made to the parking plans for the development, the OPW has altered the scheme to provide a passage for the cycleway.

Green Party councillor Ciarán Cuffe said he was pleased space had been left for the greenway.

“This will allow for a future cycling and walking route, though I am disappointed that this will not be put in place at this stage.”

However, he was unhappy with the process used to secure planning permission and that the council’s concerns in relation to transport had been discounted.

Unlike normal planning applications, the decision was made directly by the OPW’s board of commissioners, not the city council, and it cannot be appealed to An Bord Pleanála.

“The proposed building will contain 220 car parking spaces, whereas 40 spaces would be the maximum allowable under the development plan. This flatly contradicts national and local guidance on sustainable transport.”

There were also concerns at the impact on heritage, flora and fauna, he added.

The site was earmarked during the boom for a large-scale residential development. In 2003 Tom Parlon, then a minister of State with responsibility for the OPW, announced ambitious plans for a residential and office development on the site including a 32-storey apartment block. However, it was never built and last year the land was entered on Dublin city’s register of vacant sites.