Pets, kids and dance music: the perils of virtual courts

Since April, almost 200 online hearings have taken place as their style and form evolve 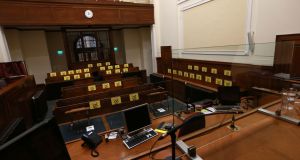 Court 1 in the Four Courts: Social distancing has changed everything. Photograph: Laura Hutton

For about a minute last Thursday the sound of cheesy 1990s dance music could be heard coming from Court 12 on the second floor of the Four Courts.

“Mr Boyle could you turn off your microphone?” pleaded Mr Justice Garrett Simons. “Could someone on the State side tell Mr Boyle to turn off his microphone?” The music soon stopped and the barristers went back to arguing about the subject matter of the case – working conditions for electricians.

Of course, none of this actually happened in Court 12 which, aside from the registrar and a reporter, remained completely empty. Rather it happened on the video screens mounted on the walls.

Virtual court hearings have become almost routine in the Four Courts since they were first trialled in April as a means of keeping the wheels of justice turning amid the lockdown.

Most technical issues have been resolved and lawyers have become somewhat used to addressing a laptop screen in their study rather than a judge sitting in front of them.

But the profession has not escaped the pitfalls experienced by the rest of us as we try to figure out how to conduct business over Zoom and Skype. Stories circulate on lawyers’ WhatsApp groups about pets and children interrupting pleadings.

“One of the most common ones I’ve heard about is the doorbell ringing,” says senior counsel Denise Brett SC. Brett, a barrister focusing on civil law and legal education, can do her court appearances from her home office but not everyone is so lucky; one barrister recalls a colleague being gently reminded that his bed and pillows were perhaps not the best backdrop for a Court of Appeal case.

There is a lot of work in preparing for a virtual court case. Documents and case law cannot be handed up to the judge during arguments; they must be filed beforehand using an electronic document management system.

Similarly, solicitors and barristers can no longer communicate on the fly with a post-it note or discreet whisper. Some get around this by using WhatsApp or a similar service. Others gather their team, together but socially distant, in a physical office for the hearing.

Brett, who has done one virtual hearing in the Court of Appeal, had to use three screens; one for the video feed, one for documents and one to communicate with colleagues, “just to keep the show on the road.”

Remote hearings have been on the horizon for years now but the Court Service’s archaic IT infrastructure meant they remained purely aspirational. That changed with the arrival of the pandemic in Ireland and the prospect of the justice system grinding to a complete halt.

Since then there have been 180 virtual hearings from the District Court to the Supreme Court, “negating the need for thousands of people to attend physically in court”, a spokesman said.

Furthermore, just under 200 judgments have been distributed “electronically”, meaning they are emailed out instead of the parties turning up to court to hear them being read out.

The system uses video-conferencing technology designed to be easy to use, meaning it lacks many of the features of the popular apps. The judge – or judges if the case is before the Supreme Court or Court of Appeal – appear on the main display while everyone else is minimised to the bottom.

Practitioners are instructed to keep their microphones on mute when not talking, meaning there are much fewer interruptions. They are also advised to “be aware of how you appear to others on the call” and to make sure they are well-lit.

A major concern when developing the system was how to fulfil the constitutional provision that “justice shall be administered in public”.

In the UK this has been overcome by streaming many cases publicly to YouTube. Ireland has taken a different approach. Journalists can request a link to a specific video stream, allowing them to report on the case as if they were in the room.

The proceedings are also streamed on to screens in the physical courtroom so members of the public can come in to watch. That’s the theory anyway; currently movement restrictions do not permit people to travel to watch cases they are not involved in, meaning the courts themselves are invariably empty.

Not every court displays the proceedings on screen. When The Irish Times visited the Four Courts on Thursday, one registrar said, apologetically, that she did not have permission to display the case on screen and only permitted the reporter to listen to proceedings through computer speakers

There are few places to sit for those who do make it down. Most seats are blocked off by bright yellow signs to enforce social distancing.

According to barristers, the technology has also drastically changed the dynamic of arguing a case, for both good and bad.

In normal hearings there is what Brett calls “a natural flow” to arguing a case where judges will interrupt advocates to ask questions or seek clarification.

With a virtual court, the practicalities of the technology mean the judges tend to save their questions for the end. This means the barrister’s train of thought is uninterrupted. But it also means they cannot adapt their arguments on the fly in response to judges’ questions. “That takes some getting used to,” says Brett.

The simplified system used by the courts means you can only properly see one person at a time.

Not being able to read the room “is one of the biggest drawbacks to remote hearings” says barrister Aoife McNickle who was involved in an early virtual hearing before the criminal division of the Court of Appeal. “That’s one of the main reasons why they will never be a substitute for physical hearings.”

Most barristers like to inject a slight bit of drama into their arguments, even in the dullest of cases. It could be gesture such as waving a document or just resting a foot on the bench (the latter being confined almost exclusively to male barristers).

Much of that drama is also absent from virtual proceedings, says McNickle. “Which is a shame.”

But, depending on the barrister, that charisma still comes across, she says. “It’s about how comfortable people are with the system.”

The Bar Council has warned its members “advocating in a remote setting is completely different to advocating in court”. To help them adapt, it has even brought in RTÉ courts correspondent Orla O’Donnell to give advice, via webinar, on presenting to camera.

Remote hearings are becoming the norm in many areas of the court system. The exceptions are criminal trials and sentencing matters. However, even in those areas, video technology is playing a role. In many case-management hearings, prisoners are now appearing in court via videolink from prison. The use of prison videolinks is up 400 per cent on last year.