Daniel Kinahan: A different story on the global stage?

The 42-year-old Dubliner is suspected of using the media, law and internet to draw attention away from his role in a gang feud 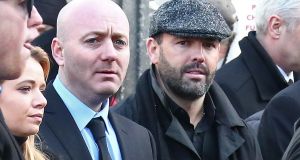 Daniel Kinahan has been in the news a lot lately and it has little to do with his leadership of the most profitable organised crime group in Irish history.

Rather, the sports pages and blogs have been lauding the 42-year-old Dubliner as a global power broker in the world of boxing and the only man capable of organising one of the most anticipated bouts in the sport’s history.

Gardaí believe it is the culmination of a secretive campaign by Kinahan and his associates to redeem his reputation, at least internationally, and allow him to take a place at boxing’s top table.

Employing sophisticated reputation management strategies, Kinahan is suspected of using the media, the law and the internet to draw attention away from his role in a gang feud which has taken the lives of 18 people and establish himself as what his law firm says he is, a legitimate Irish businessman known for his work in the boxing sector.

It is a strategy which appears to be working. Take, for instance, the coverage of Kinahan’s recent moves in the boxing world in the international press.

The UK Daily Mail calls him a “controversial boxing broker” before detailing how well regarded he is in the boxing community. It does not mention his role in the Kinahan organised crime group, unofficially known in Ireland as “the Cartel”.

Similarly, laudatory articles on websites like British Boxing News also fail to mention his criminal past.

Irish coverage is markedly different. Last week, the Irish Sun called him a “mob boss” and “drugs kingpin” in the first two lines of a piece while an opinion article in this newspaper last Saturday states “Daniel Kinahan’s role as boxing’s new kingmaker is no cause for Irish celebration”.

Usually it’s the other way around; Irish media is constrained by some of the strictest defamation laws in Europe meaning it often has to pull its punches when discussing public figures. However, the situation is different with Kinahan.

In 2018, a High Court ruling stated he controlled the Kinahan crime gang which was involved in drugs and weapons smuggling on a global scale. A month earlier, a Spanish police officer told a court in Marbella that Kinahan had ordered the murder of gang rival Gary Hutch on the Costa Del Sol in 2015.

Just last week, a garda told the Special Criminal Court the Kinahan gang was a sophisticated organisation which had ordered the murder of Patrick Hutch.

Kinahan has always been involved in boxing but the apparent campaign to whitewash his reputation is very recent.

‘Helps a lot of people’

Much of the positive commentary online about Kinahan can be traced back to a song and music video released by UK rapper J Spades on April 2nd last. The song, Major Plans, which has more than 1.5 million hits on YouTube, portrays Kinahan as a man “24 hours from being fully legit” and someone who “helps a lot of people”.

J Spades raps: “Today you’re legit and your business official. But back then you went through some shit like tissue.” The central message of the video concerns the infamous shooting in the Regency Hotel in February 2016, an event which triggered the most bloody phase of the Hutch-Kinahan feud.

The lyrics lay out a conspiracy theory that the Irish Government and the Garda were behind an attempt to kill Kinahan at a boxing event organised in the hotel that day by his company MTK.

“Twenty minute calls to police, no pick up,” says Spades. “Guess the government wanted somebody dead, hoping the bullets hit somebody’s head.” Spades did not reply to a request for comment this week.

Less than half an hour after the song was uploaded, it was shared by Spencer Fearon, a boxing promoter and the head of the MTK Global Foundation, the charitable arm of the management company co-founded by Kinahan.

The video has been shared thousands of times, including by many well-known boxers managed by Kinahan’s now former company MTK Global. It was also shared by two-time heavyweight champion Tyson Fury, the most famous boxer in the MTK stable.

On the same day it was uploaded the hashtag #truthaboutregency began to appear on social media platforms, with most of the posts defending Kinahan and portraying the Regency shooting as a Government conspiracy. By last Thursday the hashtag had been posted nearly 300 times and shared many times more. The vast majority of the Twitter posts came from outside Ireland. Many came from accounts which had only been set up in March or April.

It is difficult to determine how much of this activity is organic and how much is part of an organised campaign. For example, an account set up under a woman’s name last month has posted almost exclusively about Kinahan and the Regency.

“Major Plans was interesting so I started doing some research and to be honest at the start I didn’t think much about it but the more you dig the more you uncover and it made me feel sympathy towards Daniel Kinahan,” the account’s operator told this newspaper. They said they had never heard of Kinahan before the song. “Feel sorry for the man though.”

Perhaps the most bizarre development was the release of a “documentary” about the Regency shooting on Monday. The 14-minute film repeats many of the conspiracy theories outlined in J Spades’ song.

In a re-enactment, Kinahan, portrayed by an actor, is seen to be deeply worried about the safety of the boxing fans at the event; in one shot he watches with concern as a young child enters the hotel.

The voiceover accurately states there was no Garda presence at the event despite the threats on Kinahan’s life. However, it also contains major inaccuracies and misrepresentations, including that it took emergency services 20 minutes to respond to the shooting (they were on the scene three minutes after being alerted).

A major plank of the conspiracy theory – that the Government wanted to frame the Continuity IRA for the shooting to damage Sinn Féin’s election chances – makes little sense, considering the long-standing disharmony between the two groups.

The film has very high production values for a YouTube film. The actors are professionals and the weapons and special effects appear realistic. The lobby of the hotel bears a striking resemblance to the Regency’s before it was done up, even down to the large marble R on the floor. A spokesman for the Regency said none of it was shot there. Even the fake garda uniforms worn by the gunmen are close matches to the real thing.

It is very hard to find information on the film or who commissioned it. The Irish Times has determined it was partly filmed outside a Cardiff hotel in 2019 but it is not known if the hotel gave permission (it did not respond to queries). The man playing Kinahan is a jobbing Welsh actor and photographer and according to the film website Mandy, it was directed by a Welsh indie director who had won several Welsh Baftas. Neither man returned requests for comment.

The film appeared on the Scarcity YouTube account which is run by a Birmingham man. “No matter how much you want to take the mick out of me, I’m listened to every day by thousands and thousands of people,” he said, when contacted by this newspaper.

He said he received the video from an anonymous source. “I had nothing to do with making it. I was contacted on social media and asked if I wanted to platform,” he said. “I’m not endorsing any of the stuff. I put it out there so people could make up their own minds about it.”

Asked if he thinks Kinahan is connected to the documentary, he said “I wouldn’t rule anything out”. On Thursday the film was taken down by YouTube for using copyrighted material from the Irish Independent.

Kinahan has also instructing his lawyers to send legal letters to publications portraying him in a negative light, including The Irish Times.

The letters threaten defamation actions in the UK courts if newspapers do not take various corrective actions.

“Protecting the privacy and reputation of our clients – many of whom are well known, public figures – is paramount to us,” its website states.

Brandsmiths did not respond to a list of questions concerning the services it provides to Kinahan.

“There is a very good reason all of this is focused on the UK and not Ireland,” said a Garda who has been involved in investigating Kinahan-related crime for several years.

“His reputation here is damaged beyond repair. But they can whitewash it in the UK and the Middle East and America where people don’t automatically hear ‘Daniel Kinahan’ and think ‘Cartel’. And it’s all towards one end.”

That end is profit. Kinahan is considered by many to be the man who can facilitate a fight between Tyson Fury and Anthony Joshua, a bout which could be worth hundreds of millions of dollars.

So is Kinahan’s campaign working? “US boxing writers tend to focus more on the sport itself rather than the external parts. To me, it’s living in denial but is sadly the way of life on this side of the pond,” said American journalist with the Boxing Scene website, Jake Donován.

“As long as there is in-ring activity, most don’t seem to care how it occurs,” said Donován, one of the apparently few people on the international boxing scene willing to speak about Kinahan on the record. “In the sense that people are so willing to look the other way for [big fights] you can say that, yes, their plan is working.”

Donován’s view is reflected in recent events. Last week KHK, a sports company founded by the Prince of Bahrain hired Kinahan as a special adviser. Around the same time promoter Bob Arum, who has worked with Muhammad Ali and Sugar Ray Leonard, effusively praised Kinahan’s morals and abilities.

The icing on the cake came on Thursday when MTK, Kinahan’s former company which said it cut ties with him in 2017, announced it was partnering with him and KHK to stage bouts in the Middle East.

“I’ve no idea what reputation he’d need to mend because all I’ve read appears to be media propaganda which seems to serve a purpose of fulfilling an agenda and selling newspapers,” said Richard O’Donnell, one of his most vocal online defenders.

“He has had his name dragged through the mud by the sensationalist media and quite frankly it’s disgusting.”