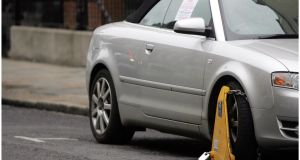 The NTA said it does not collect information on how much money private operators collect from clamping around the country. Photograph: Bryan O’Brien

The National Transport Authority, the State regulator for parking and clamping operators, is hiring extra staff to cope with the volume of appeals cases coming before it.

But despite complaints raised by several TDs over clamping by private operators, including claims that some parking ticket machines are faulty, the NTA said there is “no evidence” of a widespread problem.

There is a “two-stage appeals process” against car clamping: firstly to the car park operators, with second and ultimate appeals to be made to the NTA within 30 days of the original rejection.

The NTA said it dealt with 1,783 second-stage appeals last year, a rate of almost five every day.

Minister for Transport Shane Ross wrote to the National Transport Authority, which is answerable to him, last year to “strongly ask” it to reconsider a fine imposed on one of his constituents after her car was clamped at a Luas station car park.

The woman’s car registration was wrongly recorded when she paid for her parking by text. De-clamping fees cost up to €125.

People Before Profit TD Richard Boyd Barrett raised the issue in the Dáil after he received a number of similar complaints from constituents who had paid for parking but had made a “clerical error” in recording their registration or parking bay number.

Asked about the high ratio of upheld appeals, the NTA said last year marked the first full year of regulation of clamping activities in the State, and it was “not unexpected that the level of upheld appeals would take some time to normalise whilst the industry adjusted to the standards imposed by the new regulatory regime”.

Several people have complained on social media about being clamped at Luas car parks, claiming parking machines were not correctly recording their registration numbers.

Transdev, which operates Luas, refused to disclose the number of appeals and complaints it had received over clamping at its car parks, saying the information is “commercially sensitive”.

“Regarding the ticket machines, there is no such issue with them,” a spokeswoman added.

“If a customer types in the incorrect vehicle registration number and they realise their error upon the ticket being printed by the ticket machine, they can call our customer care team on the lo-call number and have it rectified.”

The NTA also dealt with a separate 47 complaints about clamping last year. Of these 27 were not upheld; 11 were upheld; five were partly upheld and four were withdrawn.

The NTA said it does not collect information on how much money private operators collect from clamping around the country.

Nor does the State agency, responsible for overseeing the clamping industry, keep a register of clamping operators as “it is not provided for under legislation”, a spokesman said.

“The Vehicle Clamping Act 2015 does not require parking controllers to register with the NTA prior to engaging in clamping activities,” he added.

As required under the same legislation, the NTA appointed one clamping appeals officer in 2017 to adjudicate over second-stage appeals.

It is currently seeking to appoint two more due to the “volume of submissions when combined with the time necessary to determine each individual appeal”.