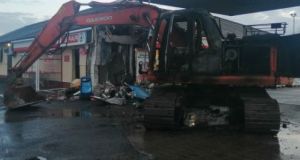 An ATM has been stolen in Co Fermanagh using a digger.

The machine was taken in Irvinestown in the early hours of Sunday.

In a statement following the incident, Det Sgt Brian Reid said: “Thieves used a digger to remove the ‘built-in’ cash machine from a filling station on the Dromore Road at around 4.05am, causing extensive damage to the building. We believe the culprits used a trailer to remove the ATM from the scene.

“We also believe the digger was stolen from ground under development nearby. The digger was set alight at the scene immediately after the theft.

“We are investigating whether this ATM theft is linked to any other recent thefts.”

The PSNI has appealed for anyone who was in the Dromore Road area of Irvinestown between 3.30am and 4.10am on Sunday and saw anything suspicious or anyone with information on the incident to contact detectives in Omagh CID on 101, quoting reference 306 of 24/03/19.

Alternatively, information can also be provided anonymously by calling the independent charity Crimestoppers on 0800-555111.

Sunday’s incident follows the discovery of an ATM machine in a burnt-out van in Co Antrim on Saturday.