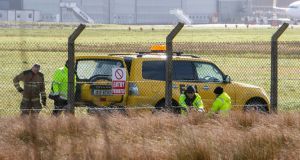 Two former US soldiers were arrested at Shannon Airport on Sunday. Photograph: Press 22

Two US military veterans were arrested at Shannon Airport on Sunday after they breached security in an effort to reach an aircraft.

The two men, aged in their 70s and 80s, managed to make their way airside in an attempt to reach a civilian aircraft used to transport troops for the US military. The Omni Air International Boeing 767 jet was parked at the terminal building at the time.

The pair, who did not reach the aircraft, were spotted at about 10.25am and were quickly detained, They were taken to Shannon Garda station for questioning.

A spokesman for ShannonWatch, a group that monitors US military aircraft movements at Shannon, said one of the men served 12 years in the US Marine Corps and the other was a paratrooper in the US army during the early 1960s.

The two are believed to be part of a group called US Veterans for Peace who are visiting Ireland giving talks and highlighting their opposition to the use of Shannon Airport as a refuelling stop for US military flights. A protest by the group and other local activists was held at the airport on Sunday.