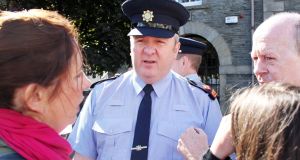 Less than two weeks after the Government confirmed a commission of inquiry into his allegations of a smear campaign against Sgt Maurice McCabe, another Garda whistleblower has been told he will not face criminal charges.

Supt David Taylor, the former head of the Garda Press Office, was arrested in May, 2015, on suspicion of having leaked information about the taking by gardaí of two Roma children from their parents. He was arrested and has been suspended from duty since then.

In October, Supt Taylor made a protected disclosure alleging he had been instructed to run a smear campaign against Sgt McCabe and alleging Garda Commissioner Nóirín O’Sullivan was involved. The Government is currently in the process of setting up a commission of investigation into those claims.

Supt Taylor remained under criminal investigation but his solicitors were contacted on Monday by the Director of Public Prosecutions’ office to inform him that he was no longer under investigation.

Supt Taylor later released a statement through ME Hanahoe Solicitors expressing his relief at the development.

“After almost two years under formal Garda investigation I have been informed today that a decision has been made not to prosecute me,” he said, adding that he awaited the DPP’s correspondence.

“I have waited a long time for this decision to be made. It has been an incredibly stressful and difficult time for my family and myself.

“I would like to thank my friends and colleagues who supported me throughout this time. I have now been vindicated and I will shortly be resuming that part of my life which has been put on hold since the start of this process.”

Supt Taylor was the head of the Garda Press Office while Martin Callinan was Garda commissioner. However, shortly after Ms O’Sullivan took over as the head of the force he was moved to traffic enforcement duties.

He found himself under investigation over allegations he was the source of reports in 2013 that revealed the Garda had at that time taken two Roma children from their parents in Westmeath and Dublin after their skin, eye and hair colour aroused suspicions around the children’s parentage.

The families were forced to undergo DNA testing before the children were returned.

The former Ombudsman for Children Emily Logan in a report published in July, 2014, concluded information about one of two children taken from their homes in October 2013 in Westmeath and Dublin had “on the balance of probability” been disclosed by a member of the Garda to the journalist who wrote the initial reports on the first child being taken.