Lynch driving at 165kph, was drunk, unlicenced and uninsured when he collided with Patton 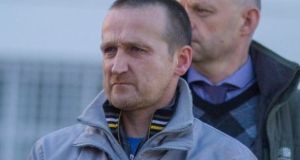 Eamon Lynch was driving at 165kph when he struck Shane Patton’s car on the main Ballybofey to Letterkenny road near Drumkeen, Co Donegal, in July 2012. Photograph: North West Newspix

A man with nearly 500 previous convictions who was jailed for 18 months after pleading guilty to careless driving causing the death of a teenager tried to sue the family of the deceased, it has emerged.

Eamon Lynch was driving at 165kph when he struck Shane Patton’s car on the main Ballybofey to Letterkenny road near Drumkeen, Co Donegal, in July 2012.

Father-of-three Lynch was drunk and had no driving licence, valid NCT, tax or insurance on his car when he hit the 18-year old who had just completed his Leaving Cert. He was sentenced last month.

Lynch had almost 500 convictions, including 280 for traffic offences and 50 for burglary.

It has since emerged the Derryman tried began an insurance claim against the Patton family’s insurance company 123.ie in relation to the crash.

“I initially opened the letter and realised it was from Eamonn Lynch and I just gave it to my husband Martin who took it to our solicitor.

“As I understood it, he was claiming off our insurance company and was claiming that the crash was in some way Shane’s fault because he came out of a side-road.

“But if he hadn’t have been travelling at twice the speed limit then this might never have happened and Shane might still be here,” she said.

At the time of the crash Shane was a named driver on Mrs Patton’s insurance policy.

Mrs Patton said she does not know if the claim is still being processed after Lynch pleaded guilty of careless driving causing her son’s death on July 12th, 2012.

She informed her insurance company in 2014 that a claim had been lodged against her policy.

At present Mrs Patton and husband Martin are paying around €1,000 between them for their car insurance.

“I’m not sure if that affected my insurance but it did go up. Perhaps we were just too honest,” she said.

Her son was 18 at the time of the crash and had just completed his Leaving Cert. He had been accepted onto a course to study to become a mechanic.

Lynch pleaded guilty to the careless driving charge and Judge Martin Nolan sentenced him to 18 months in prison.

He is already serving a driving ban until 2023.

Mr and Mrs Lynch will discuss with their solicitor to see if the leniency of the sentence can be appealed.

“I’m not even sure what the position is because it was the DPP who decided to press ahead with the careless driving charge.

“We have so many questions still that we would like answered. We realise the gardai could only do so much and they had to follow the instructions of the DPP,” she said.

“We cannot understand why the DPP would not take into account the fact that this man had so many previous convictions.