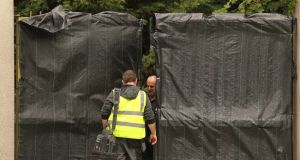 The scene of the search for the body of Trevor Deely in Chapelizod, Co Dublin. Photograph: Stephen Collins/Collins Photos

A no-fly zone has been put in place above the site in Chapelizod where gardaí are searching for the remains of Trevor Deely, the 22-year old man who vanished while walking home from a Christmas party in Dublin in December 2000.

The move is aimed at preventing photographs or video footage being recorded and made public.

The Garda became aware of plans by one drone operator to fly over the site and immediately sought the imposition of a no-fly zone. The Department of Justice made a request on behalf of the force to the Minister for Transport asking him to impose flight restrictions for security reasons.

The request was granted and the ban will remain in place until the end of the month.

A spokesman for the Irish Aviation Authority (IAA) said a “temporary ban” had been put in place over an area of land in Chapelizod. The flight restriction notice issued by the IAA applies to all unofficial aircraft, including model planes and drones. There are exceptions for emergency air ambulances and search and rescue aircraft.

Garda officers said the inquiry was at a very delicate stage and they did not want their search method, the identity of those involved or the lay-out of what is currently a crime scene, emerging publicly.

Gardaí are searching the three-acre site after receiving information that Mr Deely was shot dead following a chance encounter with a criminal figure and later buried in an underground pipe or drain on the site. The search will continue for at least another week and possibly longer.

The site, which is heavily wooded with thick undergrowth, has been split into five search zones. The search has moved into the third zone. However, some of the zones still to be searched are larger than those already completed, meaning the work will take up to two more weeks.

A gun has been discovered at the site, but it is unclear whether it is linked to Mr Deely’s disappearance and presumed murder.

Mr Deely, a Bank of Ireland employee, disappeared in the early hours of December 8th, 2000, in Dublin’s south inner city.

Garda sources have said they do not know if the information they have received is accurate but say that every credible lead must be explored.

According to the information given to them, Mr Deely was shot in the south inner city. He was last recorded on a CCTV camera on Haddington Road after 4am on the night he disappeared. Despite a massive, high-profile investigation, no progress has ever been made in the case.

Last April gardaí released some of the final CCTV images of Mr Deely. On enhanced footage, a man can be seen conversing with Mr Deely and later following him on the street.

The information received by the Garda suggests Mr Deely was shot in a chance encounter on the street just after the last CCTV image of him was recorded. The same source has identified the site at Chapelizod as the location at which his body was dumped.