PSNI called after rocks thrown at locals ahead of Assumption celebrations 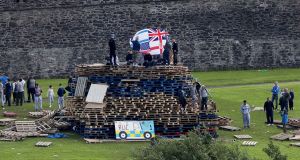 People build a bonfire in the bogside area of Derry, which is traditionally torched on August 15 to mark a Catholic feast day celebrating the assumption of the Virgin Mary into heaven. Photograph: Niall Carson/PA Wire

Police and members of the public were attacked in Derry on Monday night by bonfire-builders ahead of annual celebrations.

The PSNI were called after those gathered at the bonfire site in Derry’s Bogside threw rocks and stones at locals. Police were then targeted with petrol bombs and other missiles, but no injuries were sustained.

The bonfire is to be lit on Tuesday night. Many residents in the nationalist Bogside are opposed to the fire, which is traditionally torched on August 15th to mark a Catholic feast day celebrating the assumption of the Virgin Mary .

In recent times the fire has become associated with anti-social behaviour. Last year it was built in the middle of a main road, causing significant traffic disruption, but it has been moved to a nearby grassy bank off Lecky Road this year.

PSNI Superintendent Gordon McCalmont said on Tuesday that the attack on members of the public and police “simply damages our communities, and cannot be tolerated.”

“We shall seek to gather evidence to bring those responsible before the courts. There will be consequences for those choosing to engage in this type of behaviour,” he added.

However, tensions remain high. A group calling itself Bogside Republican Youth threatened to burn down the landmark Free Derry Wall if wood from the bonfire site was removed.

Community representatives also expressed concern at the prospect of unionist symbols being burnt on the fire.

“Tonight will see the lighting of the bonfire and I would appeal to those in the community to use their influence to control the situation so that we do not have a repeat of last night’s behaviour,” Supt McCalmont said.