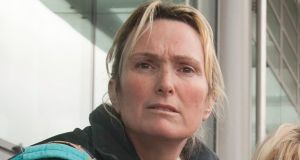 Gunmen who shot dead two people in Dublin and injured three others including a child were intent on killing only one man, who managed to escape uninjured.

Dubliner Derek Devoy (37), a criminal with a violent past, has told gardaí he believes he was the target of the attack outside a house on Balbutcher Drive, Ballymun, north Dublin, on Wednesday afternoon.

Mr Devoy, who was convicted of a drive-by shooting on his neighbours in the Ballymun area in the past, was in a car being driven by another man when they stopped off at home of Mr Devoy’s sister Antoinette Corbally.

Mr Devoy was bringing an infant boy into the house and when the front door opened to greet him, two gunmen laying in wait close by appeared and opened fire.

In the chaos that ensued, Mr Devoy managed to escape the gunmen. His sister, a mother of six in her 40s, was shot dead.

A young female relative of Ms Corbally and Mr Devoy was also inside the house and was hit by a bullet fired through the front door into the property.

The injured woman was holding a baby when a stray bullet from a submachine gun used by one of two gunmen grazed her head. She was being treated in hospital on Wednesday night.

One of the other two being treated for injuries included the baby she was holding.

The man who was driving the car Mr Devoy had just been in was also shot dead. Devoy has supplied a name for that man to gardaí but his identity was still being confirmed late last night amid doubts about who he was.

Another member of the Devoy family, Michael Devoy, was shot dead a day after release from the Midlands Prison in Portlaoise in January 2014. He was shot in the head in a gangland attack and his remains were dumped in a laneway in Tallaght, west Dublin.

A silver Opel Zafira with 08 LS registration plates was found partially burnt out close to the scene of Wednesday’s shooting. Two firearms, a hand gun and submachine gun, were found in the car.

The shooting occurred at about 4pm on Balbutcher Road outside a house where the deceased woman, Ms Corbally, and her elderly mother, Nancy Devoy, lived. However, Ms Devoy snr has been in hospital for some time and was not at the house when the killers struck.

A local drug dealer operating in Ballymun and the surrounding areas has emerged as the chief suspect for the attack. That man has been shot and wounded in the past and is heavily involved in drug dealing and gun crime.

Gardaí are now fearful the murders will lead to protracted gun feuding in the area.

The intended target of yesterday’s gun attack, Derek Devoy, has a history of serious gun crime. He has served lengthy prison sentences for armed robbery of a post office and for a non-fatal drive-by shooting on his neighbours in Ballymun in 2015.

He was regarded as an extremely troublesome prisoner while serving almost 10 years for serious gun crime. Such was his reputation for being violent and unpredictable that he was refused temporary release to attend his brother’s funeral.

Chief Supt Lorraine Wheatley of Ballymun Garda station appealed to anyone near Balbutcher Drive at the time of the murder to come forward.