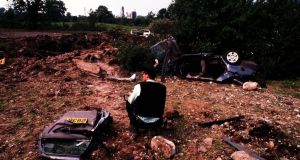 A Catholic nun and three police officers were killed in the bomb attack.

A man arrested in connection with an IRA bomb attack that killed a Catholic nun and three police officers in Northern Ireland in 1990 has been released pending report to the Public Prosecution Service.

The 55-year-old was detained in Armagh on Thursday morning by detectives from the PSNI’s Legacy Investigation Branch.

PSNI Detective Inspector Deborah Eakin said the man had been arrested on suspicion of a number of offences including the four murders.

He was taken to the serious crime suite at Musgrave Police Station in Belfast for questioning before being released pending a report to the PPS. – PA