Ballymun murders: ‘How many of those kids could have been shot?’ 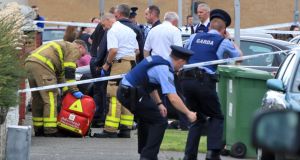 Paramedics tend to a victim at the scene of a shooting on Balbutcher Drive, Ballymun. Photograph: Colin Keegan, Collins Dublin

A group of teenage girls stand in the balmy afternoon sun discussing where to go in town to celebrate the Leaving Cert results. Garda cars drive past every so often, some with “Armed Support Unit” on the side in red letters.

Less than 100 metres away there’s a white Opel car, its windows covered in what look like black bin liners. Gardaí in white overalls and facemasks, circle the vehicle. One holds a large camera and is taking photographs from every conceivable angle.

A little further up the road a man lies dead on the ground. He has been shot three times.

He has no shirt on, it had been removed during CPR. Detectives stand over him, talking and pointing before a large blue tent is lifted over the scene. A dead woman has already been taken away.

Locals come and go from the scene. Nobody can get particularly close because of the metres of Garda crime scene tape strung around the entrance to Balbutcher Drive.

“How am I supposed to get home?” she asked a young garda.

“They’re after murdering two people up there,” someone tells her.

The woman looks embarrassed and blesses herself. The garda tells her she’ll have to walk the long way around.

The residents of the estate talk about how they can’t believe something like this could happen here.

“There’s kids everywhere, look. How many of those kids could have been shot?” one woman says.

She’s right, there are kids everywhere. There’s no school and the weather is perfect for playing outside. As if to prove her point two young boys cycle up and demand that their names be put in the newspaper.

They are later seen demanding that the garda photographer take their picture before being shooed away.

“I didn’t see anything love. I was inside having my dinner,” one woman shouts from her garden. She has to shout because she can’t leave her house. It’s right beside the crime scene and gardaí have cordoned off her gate.

“I didn’t even hear anything. You just don’t expect anything like this to happen, do you? The poor people.”

It was unexpected. The area around Balbutcher Drive is quiet, locals say. The houses are smart and the greens are well-kept. Crime is low and drug dealers are not welcome.

“This is the worst thing to happen in Ballymun in many years,” says TD Noel Rock. “It’s frustrating to see this happening when we all know that the community is much more than this kind of bad news.”

Another woman stands in her front garden chatting to the young garda assigned to keep people away from the crime scene.

She offers the garda some food, telling her she must be starving standing there all afternoon.

She doesn’t have any information on the murders though when journalists ask. “They don’t tell me anything,” she laughs.

Low-level crime remains a problem in parts of the Ballymun area but the fatal shooting of two people and the injuring of others including a young woman holding a baby; that’s not supposed to happen.

It is thought the latest deaths are unrelated to the Hutch-Kinahan feud. However, detectives are surprised by its audacious nature. The victims were shot in broad daylight at a time when many people were out enjoying the sun.

There is no shortage of witnesses saying they saw two men run from the scene.

“I saw two guys, they ran by really fast, like a flash,” says one young man standing in his front garden. His friend, who lives three doors up says the same thing.

As the evening grows colder the onlookers gather their children to go home for dinner. The teenage girls depart to get ready for the night ahead. Some of them still need to sort out fake IDs. Up the road, under the blue tent, the dead man still lies on the ground.