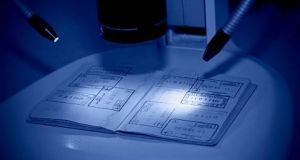 A man suspected of producing false identification including passports for Islamic State terrorists has been arrested in Dublin.

The man, understood to be from Algeria, was arrested at a property in Dublin on Tuesday afternoon after gardaí acting with the London Metropolitan Police carried out a raid on the property.

It is believed the man had been monitored in recent months because of his frequent travel between the UK and Ireland. He is suspected of producing false passports and identification for terror suspects in Europe.

The man, in his 40s, was arrested by gardaí from the Special Detective Unit [SDU] during planned searches on a number of properties in the Dublin region. He is detained in a north Dublin city Garda station under Section 4 of the Criminal Justice Act 1984.

He is being questioned in relation to a number of items, including passports seized at the property. It is believed computer equipment was also seized during the raids.

“The arrest today is significant in the operations being carried out by An Garda Síochána and the London Metropolitan Police in the crackdown on terror activities. We are questioning this individual in relation to what we believe is his part in producing or helping to produce false documents which have links to European terror organisations,” said a Garda source.

“With the help of our colleagues in the London police force and our colleagues in Interpol, the man arrested today was identified as a person of interest in the ongoing investigations into suspected terrorist activity across Europe,” the source added.

“A number of false documents were seized as part of a planned raid on a property in Dublin this afternoon and passport documents which we believe to be false and could have been prepared to help aid terrorism across Europe have been recovered, as well as ... computer equipment.

“These will now be examined by the Special Detective Unit. The man can be held for up to 24 hours during this detention period,” the source said.

Gardaí downplayed any links the arrest may have to the ongoing investigation into the London Bridge terror attack, in which seven people lost their lives.

One of the London Bridge attackers, Rachid Redouane, was a Moroccan-Libyan pastry chef who had until shortly before the attack lived in Dublin. He is thought to have settled in Ireland about five years previously and did not appear to have come to the authorities’ notice before the June attack.

Woman awarded €83,000 damages after slipping and falling in Dunnes Stores 17:40
Cabinet approves purchase of 875,000 doses of Moderna vaccine 17:34
Almost a third of early years childcare workers intend to leave sector within year 17:21
‘It’s the most I have been out in months’: Gym-goers return to their workouts 17:10
Senior Department of Education official to be cross-examined in case over grades 16:56