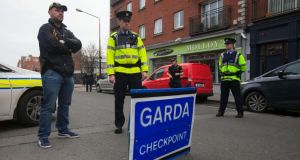 Gardaí at a checkpoint on Francis Street in Dublin. Photograph: Gareth Chaney/Collins

The shooting of two young Dublin men, who were close friends, in less than 24 hours, brings into focus the renewed gangland feuding in the capital.

The violence is worsening at a time when Garda overtime – the main means the force has to put in place the rapid reaction and saturation policing required to combat spikes in extreme violence – is being cut.

While newer feuds are now worsening, the Garda also continues to mount a major operation across Dublin in a bid to quell the Kinahan-Hutch feud.

To date, 18 lives have been lost in that feud since it began with the murder of Gary Hutch in Spain in September 2015.

While that feud remains by far the biggest challenge being posed by gangland criminals anywhere in the Republic, the emerging feuds are also extremely challenging.

In Finglas, north Dublin, the organised crime scene had been quieter in the years following the 2010 murder of Eamon Dunne to the extent a murder spree he ordered in the final years of his life came to an end.

However, a young gang leader has now become established in the Dublin suburb in recent years and he is embroiled in local feuding with another faction. That dispute has not resulted in any killings to date, though gardaí fear it is only a matter of time.

In the west of the city, a feud has been worsening between two rival factions in Mulhuddart. Like the localised Finglas feud, there have been no killings to date but gardaí now fear killings are inevitable.

To make matters more complicated, the dominant gang leader in the Finglas feud is supporting one of the factions involved in the Mulhuddart feud and he is also aligned to the Kinahan cartel.

On Tuesday night shots were fired at men in a vehicle at about 9pm on Church Road in Mulhuddart. Gardaí suspect the gunman’s target was a local man in his early 20s who is involved in the feud.

Dublin aside, gardaí are also dealing with a violent gangland dispute in Drogheda, Co Louth, which shows no signs of abating almost 12 months after it ignited. The gangland situation in Drogheda has become further complicated recently with the release of a Co Louth gang leader from prison.

That man is associated with those suspected of involvement in the gun murder of Benny Whitehouse (35) in Balbriggan in 2014.

He is also associated with those suspected of involvement in the abduction and murders of Willie Maughan (35) and Latvian national Anastasija (Anna) Varslavane (21). They were last seen in Gormanstown, Co Meath, on April 14th, 2015.

Gardaí believe they were killed because the men who killed Whitehouse feared the couple was intent on supplying information to the Garda about the Whitehouse murder.

The criminal recently released from prison is the leader of one of the two gangs embroiled in the Drogheda feud.

It had been simmering for some time but began in earnest last July when a man was shot and wounded in an attack that left him paralysed. His close associate has since been shot in the upper body but survived.

Another feature of the Drogheda feud has been the use of petrol bombings to attack houses, gutting a number of them.

Pipe bombs have also been deployed and an effort was made to blow up gas canisters packed into a vehicle left outside the home of one of the targets in the feud.

Criminal investigations by the Garda into the different feuds have already resulted in prosecutions and lengthy prison sentences for some of those involved. And more prosecutions are expected.

However, in the shorter term the Garda must quell the violence in an effort to prevent further loss of life. With feuding worsening on several fronts in Dublin and Louth, as overtime is being very tightly controlled, the challenge is very significant.