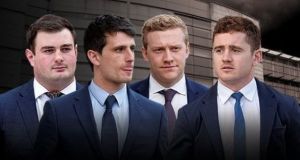 Judge Patricia Smyth had rebuked the defence during the Belfast trial for its aggressive questioning of the complainant.

A tweet about middle-class girls, a question about the judge’s tone of voice, and blood on the bedsheets were among issues discussed in legal argument in the absence of the jury in the Belfast rape trial last month.

Following the completion of the trial, which saw all four accused acquitted, Judge Patricia Smyth ordered there should be no reporting of the legal argument which took place during the trial in the absence of the jury.

Such reporting restrictions typically fall away at the end of a jury trial, as their sole purpose is to avoid jurors being prejudiced by matters which do not form evidence in a case. A media application heard on Wednesday has resulted in those restrictions being removed.

Following the verdict, Judge Smyth ordered that restrictions on reporting legal argument which took place in the absence of the jury should remain in place until further notice.

Below are the legal issues discussed during the trial in the absence of the jury.

Mr Jackson’s defence team attempted to have the jury discharged and the trial abandoned over a tweet, sent by Stormont Assembly member Naomi Long, criticising the defence’s closing speech.

During the final stages of the trial, counsel for Mr Olding, Frank O’Donoghue QC, told the jury the police should have asked the complainant certain questions when interviewing her.

“Why didn’t she scream the house down?” he said.

“A lot of very middle-class girls were downstairs. They were not going to tolerate a rape or anything like that.”

The “middle-class girls” remark drew a huge amount of criticism on social media, including a tweet from the Alliance Party politician stating: “I genuinely have no words for how atrocious this statement is. ‘Middle-class girls?’ What because ‘working-class girls’ wouldn’t care/don’t matter/think rape is normal?

“What is the implication of that comment even meant to be. Appalling at every level.”

The now deleted tweet was posted on March 22nd. On March 26th, the day before the jury were to begin deliberations following eight weeks of evidence, Mr O’Donoghue told Judge Smyth he was making an application for the jury to be discharged. He said he was making the application because he believed the jury could have been prejudiced by the tweet.

The judge rejected the barrister’s application, stating she had already told the jury to avoid social media.

It can also be reported that on the same day Ms Long’s tweet was raised in court, Brendan Kelly, for Mr Jackson, submitted that Judge Smyth was being overly sympathetic to the complainant during her closing address to the jury.

The application, which was also made in the absence of the jury, came while Judge Smyth was recounting the evidence to the jury and reading out parts of the complainant’s and Mr Jackson’s testimonies.

Counsel said it was “with a heavy heart” that he had to object to the judge’s tone. He said when she recounted the complainant’s evidence, she did so in an “emotive” fashion.

This “tone” and “sympathy” was not present when she dealt with Mr Jackson’s evidence, he submitted.

Mr O’Donoghue, acting for Mr Olding, agreed, saying there was a slight difference in the judge’s intonation when dealing with the defendant’s testimony.

The judge angrily rejected this and said she was not aware of any differences in her tone. She said she wanted to say – “for the record and for the press” – that all defence teams had a chance to review her closing remarks and that she had made charges based on their recommendations.

Judge Smyth also rebuked the defence earlier in the trial for its aggressive questioning of the complainant.

During week three of the case, Arthur Harvey QC, for Mr McIlroy, was questioning the complainant in a sharp manner. At one point, the judge stopped proceedings and sent the jury away before warning counsel to “moderate your tone”.

She reminded Mr Harvey “this is a vulnerable witness by law”.

This occurred after Mr Harvey had questioned the woman on her inconsistencies in her account of what Mr McIlroy did. She had told the court he was naked when he entered the bedroom but told a doctor previously he came into the room and then lowered his trousers.

Explaining the inconsistency, the woman said she was still trying to process what had happened when she spoke to the doctor on the day of the rape.

“You go into shutdown, it’s incredibly hard to state what happened until you’ve actually processed it.”

Harvey asked, in suspicious tones, why the woman used the impersonal “you” in this statement.

“You’ve said this before. It’s almost as if you’re repeating something you’ve read rather than your personal experience,” Mr Harvey suggested.

The appearance of Ireland rugby captain Rory Best in the court’s public gallery during the complainant’s evidence caused a considerable public outcry and caused the hashtag #notmycaptain to trend on social media.

Mr Best, along with former Ulster teammate Ruan Pienaar and mixed martial arts champion Leah McCourt, were scheduled to appear as character witnesses for Mr Jackson later in the trial.

Mr Best later explained during a post-match press conference he “was advised that it is important that I got both sides of the story so I could make an informed decision about [being a character witness].”

The following week the legal teams and the judge agreed that, such was the media storm surrounding his appearance, the jury should be told Best had been instructed to attend by the defence.

Towards the end of the trial, Jackson’s barrister announced in the absence of the jury there was “reluctance where previously there had been willingness” among character witnesses due to give evidence.

Referring to the previous media coverage of Mr Best’s appearance, he said he was considering making “all sorts of applications”. This was understood as a reference to a possible ban on the reporting of the character witness evidence.

In the end, no such application was made and none of the well-known names appeared as witnesses. Instead Jackson’s former Ulster teammate, Declan Fitzpatrick, his brother’s partner and a family friend, gave evidence of his good character.

Other evidence which could not be reported during the trial included the presence of Mr Olding’s semen on the crotch of the woman’s jeans. Instead, the jury was simply told the semen was found on the jeans, without being informed specifically where.

The evidence was kept from the jury as it was ruled to be overly prejudicial. Mr Olding had originally been charged with vaginal rape of the woman but this count was effectively dropped by the prosecution in 2017, leaving a sole count of oral rape against the accused.

Judge Smyth ruled that allowing evidence of the presence of his semen on the crotch of the jeans would be overly prejudicial give the absence of a vaginal rape charge.

Photographs of Mr Jackson’s bedroom formed part of the exhibits in the case, including pictures showing the woman’s blood on his bedsheets. However, there were also other bloodstains on the sheets which did not come from the woman.

The source of this blood was never explained in court. Mr Kelly, for Mr Jackson, said he had “no intention of saying where this blood came from”. He said pictures of the blood would distract the jury.

In order to find a solution, Judge Smyth made the unusual suggestion of “airbrushing” out the blood stains which did not relate to the woman.

As a result, the bloodstains were removed using Photoshop before the pictures were shown to the jury.

Much of the evidence involved texts exchanged by the four accused in the aftermath of the alleged rape, boasting about their sexual activity. Mr Jackson and Mr Olding spoke about “spit-roasting” the woman while Mr McIlroy texted a friend that he had “pumped a girl with jacko, roasted her”.

The defence argued the clip was irrelevant and could “indicate bad character” on Mr Harrison’s part.

Judge Smyth said the issue of whether legal, adult pornography shows bad character “may attract a wide divergence of public opinion, depending on age bracket or gender”.

The judge agreed the clip could have some probative value for the prosecution but said any doubt should be resolved in favour of the accused. The video was not disclosed to the jury.

It also did not hear about pictures sent by a friend of the men, identified as AA, to a WhatsApp group containing Mr Jackson, Mr Olding and Mr McIlroy.

The pictures showed AA having sex with a woman in the recent past. One of the accused men reacted “very enthusiastically” to the pictures, the prosecution said.

The four accused were acquitted of all charges at Belfast Crown Court.