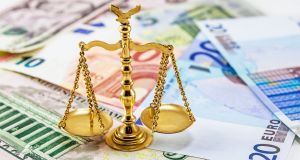 The Director of Public Prosecutions (DPP) has taken the Information Commissioner to the High Court for ordering the release of letters about increases in fees to barristers and solicitors prosecuting criminal cases.

The legal proceedings stem from the commissioner’s decision last month to grant the release of correspondence since 2013 to the DPP from the Department of Public Expenditure and Reform, which signs off on lawyer fees.

The DPP made an unsolicited submission to the commissioner before the ruling, arguing the correspondence should not be released to The Sunday Times under a Freedom of Information (FOI) Act request as the DPP is excluded from the Act and that even the department’s replies to the DPP should also be excluded.

The commissioner did not consider the DPP’s submission in its ruling on the basis that it was not an affected party and that the newspaper was looking for the department’s replies, not the DPP’s original letters.

The DPP’s main grounds for seeking an appeal of the commissioner’s decision to the High Court is that the correspondence from the department should also be covered by its exclusion from the FOI legislation.

Legal papers setting out the DPP’s appeal on a point of law were received by the commissioner yesterday, shortly before the four-week window for an appeal was due to close, following the March 8th ruling.

The department has permitted the DPP to pay higher fees to certain barristers and solicitors prosecuting criminal cases on behalf of the State based on submissions from the DPP on a case-by-case basis.

The Council of the Bar of Ireland, the representative body for barristers, made representations to the DPP and the department in 2016 demanding an increase in fees arguing that the State’s “financial emergency” was over and crisis-era cuts in fees, amounting to almost 30 per cent, should no longer apply.

In seeking to block access to its correspondence, the department had argued that their release may materially affect the ability of a barrister or solicitor to charge comparable rates in the private and public sector if they are shown to have been paid significantly less than another for comparative work.

The department claimed that if the pay details were released, it would “materially affect the State’s ability to negotiate value-for-money rates in the future to the detriment of the Exchequer”.

In response to concerns about commercial sensitivity of fees paid, the commissioner wrote to 23 legal counsel and three had no objection to the release of information about the payments sought and sanctioned.