Messages between O’Brien and Buckley key in High Court submission 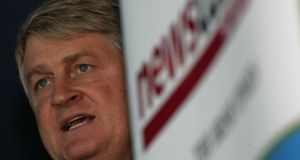 Businessman Denis O’Brien. “Is against me in a case Declan Ganley and Comcast are taking re mob licence,” Mr O’Brien texted to Leslie Buckley, according to the watchdog’s affidavit.

Text messages between businessman Denis O’Brien and former Independent News and Media chairman Leslie Buckley form a key part of the High Court submission seeking the appointment of inspectors to the company.

Mr O’Brien’s communications in December 2016 with the then chairman of the media group are quoted in support of a claim that Mr O’Brien was seemingly involved in the business affairs of INM without this being made clear to the board.

An affidavit from the Director of Corporate Enforcement, Ian Drennan, states that in December 2016 when the INM board had agreed who to appoint to independently review a serious dispute within the group, Mr O’Brien texted “avoid if possible” to Mr Buckley when told that the board was to appoint Brian O’Moore SC to carry out the review.

“Is against me in a case Declan Ganley and Comcast are taking re mob licence,” Mr O’Brien texted to Mr Buckley, according to the affidavit.

This was a reference to Mr O’Moore acting for businessman Declan Ganley in a case concerning the awarding of the State’s second mobile phone licence to Mr O’Brien’s Esat Digifone in 1996. Mr Ganley was part of a losing consortium.

On the day after the text exchange, Mr Buckley spoke with David Byers of McCann Fitzgerald, who was advising the board of INM and had proposed the appointment of Mr O’Moore. Mr Buckley told him that Mr O’Moore was acting for a company that had taken a case against a company with which Mr Buckley was connected, called Nualtra.

Although Mr Byers expressed the view that this did not create a conflict for Mr O’Moore, the exchange led to a decision to “pursue other options”, according to the affidavit.

The text exchanges and the record of Mr Buckley’s subsequent dealings with Mr Byers demonstrate the involvement of Mr O’Brien in vetoing the membership of the independent review “seemingly without this being disclosed to the board,” according to Mr Drennan’s affidavit.

‘Not open’ with INM

It suggests that the chairman, Mr Buckley, was “not open” with INM as to the reasons for vetoing Mr O’Moore, Mr Drennan said. It was not because of the Nualtra case, but because of the objection of Mr O’Brien.

Mr Buckley was Mr O’Brien’s nominee to the board but directors of publicly listed companies are obliged to act on behalf of all shareholders. Mr O’Brien, with 29.9 per cent of INM, is its largest shareholder.

Mr Buckley was not party to the board process of selecting who to appoint to conduct the review, because he was directly involved in the dispute that was to be investigated.

However, he learned “within minutes” of the decision of the other directors to appoint Mr O’Moore, according to the affidavit.

The dispute to be investigated involved a proposed sale of a radio station owned by Mr O’Brien, Newstalk, to INM, at a price which the then INM chief executive, Robert Pitt, thought might be up to €20 million more than the station’s true value. Mr Buckley was promoting INM buying the station, according to Mr Drennan.

The board eventually appointed David Barniville SC, who is now a High Court judge, and Northern Ireland accountant Stephen Kingon, to conduct the review. They did not come to a definitive finding because of the conflict between the submissions they received from Mr Buckley and from senior INM management.

Mr Drennan said it was “wholly inappropriate” that Mr O’Brien should have “any role” in the elimination of potential candidates for conducting the review.

He wants to see High Court inspectors appointed to investigate this matter, a suspected major data breach at the media group, the circumstances concerning the proposed Newstalk sale, which never went ahead, and other matters.

Mr Drennan’s application comes before the president of the High Court, Mr Justice Peter Kelly, on April 16th. The INM board, which met on Wednesday, is currently taking advice from two senior counsel and from McCann Fitzgerald as to whether the affidavit contains sufficient basis for such an application.

Spokespeople for INM and Mr Buckley said they did not wish to comment. A spokesman for Mr O’Brien did not respond to a request for a comment. Mr Byers said he could not comment about client matters.