Natalia Karaczyn killed by man known to her, gardaí believe 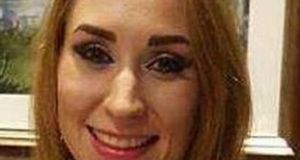 Mother-of-three Natalia Karaczyn was killed by a man known to her after a night out socialising, gardaí believe.

The remains of the 30-year-old Polish woman were found on the outskirts of Sligo town this morning.

Gardaí believe Ms Karaczyn was strangled in the early hours of Sunday at another location.

They are working on the theory the killer then panicked and transported her body to the spot where it was found.

That location, and a house in Sligo, have been forensically examined as part of what is now a murder inquiry.

While a chief suspect has been identified, arrested and charges are imminent, gardaí are still appealing for anyone with information to come forward. They are especially keen to track the movements of a Peugeot 308 estate model car, with early on Sunday being a key time for sightings.

A person of interest to the Garda investigators was spoken to by detectives on Sunday and gave an account of his last interaction with the deceased.

CCTV footage has been gathered by the Garda and one of the recordings contradicts the suspect’s account.

Gardaí immediately suspected he was somehow involved in Ms Karaczyn’s disappearance. When the remains were found, that man become a murder suspect.

The married mother-of-three had been reported missing on Sunday and gardaí had been searching for her.

Her remains were discovered just hours after a man being questioned about Ms Karaczyn’s disappearance was released without charge.

However, after the dead woman’s body was found, the man was rearrested late this morning and he was still being quizzed tonight.

The area on Holywell Road, Carns, where Ms Karaczyn’s body was found, was sealed off immediately after the discovery was made.

Her body was left in situ until Deputy State Pathologist Dr Linda Mulligan carried out a preliminary examination at the scene. The remains were then removed for a full postmortem this afternoon.

She left her home at Crozon Park, Sligo, on Saturday evening alone to meet up with friends for a night out. Her sister tried to contact her on Sunday, and when repeated calls to her mobile went unanswered and were not returned she grew worried and reported her concerns to the Garda.

A number of people who were with her on Saturday night and into Sunday morning were spoken to.

The account of one of those people was contradicted by CCTV, leading to the arrest of the suspect on Monday.

He was questioned under Section 4 of the Criminal Justice Act and released without charge at about 5am this morning.

Shortly thereafter, gardaí acting on information provided to them found the body of Ms Karaczyn.

Today, the 32-year-old suspect was arrested for a second time. He was still being questioned tonight at Ballymote Garda Station under Section 4 of the Criminal Justice Act 1984.

Coronavirus cases rise in most counties but rate of increase is slowing 12:56
Gardaí investigating Meath death not looking for another person or vehicle 12:05
Ireland’s travel green list reduces to four countries 09:53
Thousands of at-risk young people miss out on vital services over pandemic – report 08:09
€10m announced for disability sector to resume supports and increase service days 07:47