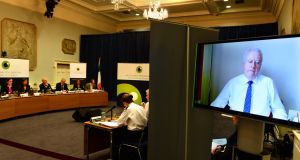 In one recent case over 100,000 images – photographs and videos – were discovered on the computers of one man.

He was detected in February during a “super raid” when teams of gardaí conducted surprise searches at the homes of 31 suspects across 12 counties.

Assistant Commissioner John O’Driscoll, head of Special Crime Operations, said the raids had been conducted under Operation Ketch, the results of which suggested to him this form of criminality was a serious one in Ireland.

Examinations of computers and other electronic media devices since the raids had confirmed that one of the suspects was in possession of over 100,000 images.

Mr O’Driscoll said at least four more super raids would take place before the end of this year under Operation Ketch. His teams expected to arrest over 100 suspects and once again seize child abuse images and video on huge scale.

“Operation Ketch tells us as a society we have a very serious issue with people who seek to look at this type of material,” he told a meeting of the Policing Authority. “The fact there are so many images being discovered in individual cases is a challenge.”

The priority for the Garda was to ensure if any of the child victims was in the State and could be rescued by the force, they needed to be identified, he told the meeting.

Mr O’Driscoll had been assured by the head of Europol that any “more advanced” resources the Garda needed to aid its inquiries into this area of crime would be made available. But he said enhanced Garda resourcing was already paying dividends.

“At one stage we were talking about having computers for five or six years unexamined,” he said of seized laptops and desktops believed to contain illegal images.

“We now have a situation where we expect to have a backlog eliminated by the end of next year. And the courts in more recent times have spoken positively about the improved speed at which we can now examine.”

All computers needed to be analysed to confirm exactly what they contained so the suspects could be prosecuted.

The Policing Authority also discussed the findings of an internal Garda report on the policing of an anti-water charges protest in Jobstown on November 15th, 2014.

The then tánaiste and Labour Party leader Joan Burton was held in her car, with her assistant, for three hours after protestors surrounded the vehicle and gardaí on the scene lost control for a period.

Efforts by the State to prosecute a large number of suspects, including Paul Murphy TD, ended in failure and controversy when they were acquitted.

Authority member Bob Collins said a litany of mistakes by the Garda had contributed to the public disorder on the day.

Public order personnel dispatched in vehicles to the scene were given the wrong rendezvous point and the car park at the premises where Ms Burton was attending a graduation had not been secured. Despite plans for the protest having been circulated on social media, nobody in the Garda had monitored and collated the information from social media.

Acting Garda Commissioner Dónall Ó Cualáin said the report “isn’t pretty” but that its recommendations were being acted on.