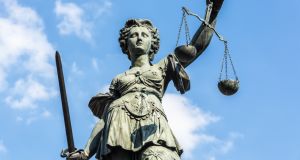 A mother fought back the tears in court on Wednesday as she told how she still loved her son but could not bring herself to visit or write to him after he held a knife to her throat.

Jane Beckwith, who is in her 50s, said her son threatened to kill her during a drunken row at the family home earlier this year.

Ms Beckwith said her life had changed forever when her son, Jack Archer (22) put a knife to her throat. Ms Beckwith said she thought she was going to die during a row over his drinking at the family home at Roseabbey Crescent in Kinsale in Co Cork on June 9th last.

Archer pleaded guilty at Cork Circuit Criminal Court to a total nine charges including assault of Ms Beckwith and of his girlfriend, Hannah Santry, assault causing harm to his stepfather, Paul Beckwith and threatening to kill Ms Santry, Ms Beckwith and Garda David Kelly as well as criminal damage.

Ms Beckwith told how she struggles daily with flashbacks of her son’s face just inches from her face during the row.

“I’ve gone through a range of emotions since that day - fear, despair, sadness, helplessness, hopelessness, anger and loneliness but fear is the one that stays with me still.”

“I love and miss my son but I am still too frightened to visit or write to him. I hope at some time in the future we can start to rebuild our relationship and I hope, as any mother would, that in the future Jack can lead a happy and purposeful life and we can all put this terrible ordeal behind.”

Det Garda Mick Brosnan told how a row broke out at the family home over Archer’s drinking and he assaulted his girlfriend, Hannah Santry. He said when the man’s mother tried to intervene, he assaulted her and when her husband came downstairs to assist, Archer assaulted him.

They managed to get him out of the house and locked the door only for him to smash the patio door and return. He then picked up a knife and threatened Ms Santry and then threatened his mother before Mr Beckwith was able to raise the alarm and neighbours called the gardaí, the court heard.

The Garda Regional Support Unit was deployed and Archer was tasered and disarmed before being arrested. “He was very intoxicated and appeared to be out of his mind - he was taken to Cork University Hospital and transferred to the Acute Mental Health Unit,” said Det Garda Brosnan.

Archer was as co-operative and forthright as he could be given that he did not have a great recollection of the night, said Det Garda Brosnan. He said Archer had no previous convictions and had never come to Garda attention prior to that night.

Defence barrister, Ray Boland BL said that his client accepted that his family did not want him home. He hoped to go to a residential treatment centre for substance abuse upon his release from custody following the completion of whatever jail term the court imposed.

Judge Sean O Donnabhain said it was shocking ordeal for Archer’s family, in particular his mother. He said Archer was completely out of control after fuelling himself with drink and capable of anything on the night and his arming of himself with a knife was a particularly aggravating factor.

However his plea of guilty was of particular benefit to his victims and he accepted his remorse was genuine, said Judge O Donnabhain. He noted that medical reports suggested he had underlying mental health issues which could not be addressed until substance abuse issues were attended to.

He sentenced Archer to six years in jail on the charge of threatening to kill. However he suspended the final four years given his remorse and it was his first conviction. He made it a condition of the suspension that he would have no contact with his family without the court’s permission.