Prisoners told to keep electronic tags in pockets after fault 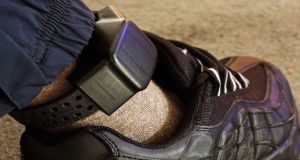 One inmate was obliged to spend an additional 12 days in prison because the tracking device would not attach properly to the leg. File photograph: Getty Images

Prisoners on temporary release had to keep electronic tagging devices in their pockets after the straps broke during a Prison Service pilot programme that saw most of the equipment malfunctioning.

Problems with the devices, which use GPS technology to track offenders’ movements, included the faulty transmission of signals, resulting in periods where some prisoners were not monitored.

In one instance a prisoner had to spend an extra 12 days in prison because the tracking device would not attach properly to her leg.

The pilot project, which took place in 2010, is the only major test of electronic tagging of offenders in Ireland.

Its results are being examined by the Department of Justice ahead of plans to electronically tag some suspects released on bail.

A report on the Prison Service’s pilot programme, seen by The Irish Times, details a series of problems with the project.

Two female offenders contacted the prison to complain of swelling in their legs. The authorities loosened the straps of the devices but their legs continued to swell. They were advised over the phone to cut the devices off until the tags could be replaced.

Some prisoners had to keep the devices in their pockets after the straps broke. Less than a month into the pilot project, devices fitted to four offenders had come off at least once.

The prisoners were advised to carry the tracking devices on their person until they could visit the prison to have them reattached.

However, the Prison Service has declined to use electronic tags since, although they have been used on a very small number of prisoners who are in long-term hospital or palliative care, a spokesman said.

One of the prisoners tagged in this way was serial killer Geoffrey Evans, who was in a coma in the Mater hospital for three years until his death in 2012. Prior to tagging him, it had cost the Prison Service €900,000 a year to guard him.

The report into the pilot programme said the faults with the devices, which were supplied by McElwaine Smart in Fermanagh, were down to quality-control failures.

It stated that if knowledge of the faults, particularly the faulty straps, became public, it could have been “fatal” to the project.

“Had this become public knowledge, the credibility of the project could have been damaged beyond repair,” the report stated.

Thirty-one prisoners were selected to take part in the trial after volunteering. They were chosen because they were well-behaved, low-risk prisoners who would otherwise not qualify for temporary release.

All prisoners, except one, complied with the terms of their release and were happy with the tagging programme. The tags were used to ensure they kept their curfews and stayed out of areas they were banned from as part of their release conditions.

Most of the prisoners were serving sentences for drug offences but two had been convicted of manslaughter or murder. Three were women with infant children.

None found the tag demeaning or embarrassing and all said it was a constant reminder their every move was being monitored. Some said the tag discouraged criminal associates from visiting them.

One prisoner even requested the tag be left on after the project ended as it dissuaded her from offending.

The single prisoner who was detected breaking his curfew returned to prison voluntarily after 11 days.