Analysis: Doubts persist about tagging and impact on crime 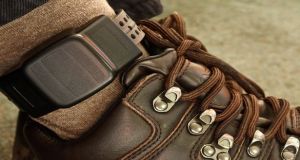 If tagging was introduced there are also limitations on how and what gardaí or other authorities can record. File photograph: Getty Images

For over a decade it has been open to judges to order an offender be electronically tagged to ensure they keep a curfew or stay out of a certain area.

The Criminal Justice Act 2006 states if an offender is facing a sentence of more than three months a judge can “restrict their movement” instead of imposing a prison sentence. An electronic tag can be used to ensure the offender maintains a strict curfew and stays away from certain areas.

To date this hasn’t happened in a single case. In fact, apart from a limited pilot project for convicted prisoners, the authorities have shown a marked reluctance to use the technology to monitor offenders.

There are two main reasons for hesitancy: costs and doubts about the effectiveness of tagging in reducing crime.

When it comes to convicted offenders, judges and probation officials have been almost universally of the view that conventional monitoring of offenders is more beneficial and efficient than electronic tagging.

Traditional measures, like having an offender meet regularly with a probation officer or engaging in community service, not only allow for supervision but also fulfil a rehabilitative role, something a ankle bracelet does not do.

There is also recognition that electronic monitoring only works if it is supported by a large support staff, including enough gardaí to react when an offender enters a forbidden area or fails to return home at night.

It was unfortunate that the introduction of the legislation in 2006 was followed a few years later by a severe recession and a freeze on Garda recruitment which the force is only now beginning to recover from.

Judges are also aware that offenders with addiction issues and a chaotic lifestyle have short-term outlooks. The reason they repeatedly find themselves before the courts is because they don’t think about the consequences of their actions.

If they make a decision to reoffend or breach their probation conditions, an electronic tag is unlikely to change their mind.

If tagging was introduced there are also severe limitations on what gardaí or other authorities can record. The legal consensus is offenders cannot be monitored for more than 12 hours a day.

When it comes to prisoners on temporary release, the pilot project report recommended its use on a small scale but also stressed the limitations of the system.

There is no point in tagging prisoners already eligible for temporary release as such people “rarely reoffend or come to Garda notice”, it states.

“Costs will merely be increased if tags are used for the type of prisoner who has been released safely without being tagged until now.”

Instead only well behaved, stable prisoners who would otherwise just miss out on temporary release should be considered, a cohort which is quite small at any one time, the report states.

However there is now a renewed focus on how tagging can be used following the recent passage of legislation which strengthens its use for those on bail. It is hoped the new legislation will make judges more likely to consider it as an alternative to holding someone in custody pending trial.

“Intensive work is underway to allow these provisions to be commenced,” a Department of Justice spokesman said, adding that a high-level working group is due to report on the matter shortly.