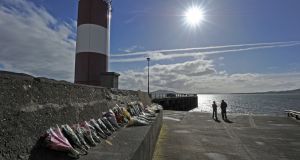 The inquest is scheduled to begin Wednesday into the tragedy in which five members of the same family drowned off Buncrana, Co Donegal, in March 2016.

A pre-inquest hearing in September heard that first responders could not open the doors of the family’s car after the Audi Q7 entered the waters off Lough Swilly.

The five people who died were Sean McGrotty, his sons Mark (11) and Evan (8), his mother-in-law Ruth Daniels, and her teenage daughter Jodie-Lee Tracey.

Mr McGrotty’s baby daughter Rionaghac-Ann was rescued after her father passed her out the window to local man Davitt Walsh.

The tide at the time of the tragedy and the difficulties the vehicle apparently had in getting a grip on the pier as it slipped down into the water, are among the issues likely to be reviewed at the Buncrana courthouse hearing.

Access to the slipway was closed in the wake of the accident. The slipway is a wide one and was designed primarily for use by the seasonal ferry between Buncrana and Rathmullan, with depth off it to allow for the ferry’s draught.