Meath man (53) was at Liverpool match with brother when assaulted

Fighting broke out between football supporters outside Liverpool's Anfield ground on Tuesday night (April 24) before the Champions League match against Roma of Italy. The BBC filmed groups of hooded youths fighting. 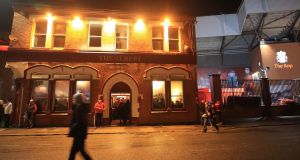 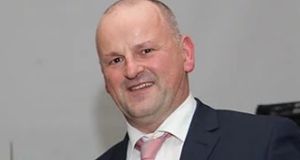 Sean Cox (53) from Co Meath, who is being treated at Walton Neurological Centre.

Two Roma fans have been arrested on suspicion of attempted murder after an Irish Liverpool supporter was attacked ahead of the Champions League semi-final at Anfield.

Sean Cox (53) from Co Meath, who was at the match with his brother, is being treated at Walton Neurological Centre, where his condition is described as critical.

Merseyside Police said said two Roma fans, aged 25 and 26, were arrested amid scenes of violent disorder ahead of Liverpool’s clash with Roma, which the home side won 5-2.

Liverpool Football Club said it was “shocked and appalled” by the incident and urged fans and those who attended the game to help police with their appeal for information.

Detective Inspector Paul Speight said: “We believe the victim was in Liverpool with his brother for the Liverpool v Roma semi-final and was assaulted during an altercation between Roma and Liverpool fans near to the Albert pub at about 7.35pm.

“Witnesses report that the victim was hit with a belt and then fell to the ground.

“Paramedics treated him at the scene and he was taken by ambulance to Walton Neurological Centre, where he is being treated for a head injury. His condition is currently described as critical and his next of kin have been informed, ” Insp Speight said.

The Albert pub is located at the Kop entrance to Anfield football stadium.

He is a life-long Liverpool FC supporter and used the match as an opportunity to also meet up with his brother who lives in the UK.

A former chair of St Peter’s GAA Club in Dunboyne, he is also a member of the Dunboyne Athletic Club’s Fit4Life group and ran the annual four-mile road race in the village last month.

Local community activist Noel Leonard said on Wednesday evening: “Everyone I spoke to would agree that Sean is the very essence of a gentleman. He’s very dedicated to anything that he takes on. He was hugely supportive in the first Dunboyne St Patrick’s Day Parade and went out of his way to help us get the equipment needed for the event.”

Local Fianna Fáil Councillor Damien O’Reilly described Mr Cox as a “cornerstone” of the community. “He has done huge work locally,” he said. “Sean is heavily involved in the community and the local GAA club.

“Everyone in the area is shocked by the news. We are thinking of him and his family at this tough time. We are praying for a speedy recovery.”

On Wednesday morning a Merseyside Police spokeswoman said Mr Cox was “still in a critical condition”.

His alleged assailants were among a total of nine men, aged between 20 and 43, who were arrested for various offences before and after the match.

The offences included affray, assault, possession of offensive weapons, possession of a controlled drug, criminal damage and being drunk and disorderly.

Videos taken shortly after the altercation shared on social media appear to show several men among the group of travelling Roma fans swinging their belts as weapons. At least one was seen carrying a hammer.

In a statement, Liverpool FC said: “[We are] shocked and appalled after a Liverpool supporter was left in a critical condition having been attacked prior to the Champions League fixture against AS Roma.

“Our thoughts, in the first instance, are with the victim and his family at this very traumatic time. We will be offering them our full support.

“The club has been liaising with the emergency services since the incident occurred and will continue to do so.

“Liverpool FC directs supporters and those in attendance at the game to Merseyside Police’s appeal for information.”

A spokesman for the Department of Foreign Affairs says it has not received a request concerning the incident, but it remains ready to provide consular assistance if required.

A GoFundme page, set up by the Irish Liverpool Reds Facebook Page to help cover Mr Cox’s medical bills and accommodation for his family, has already hit nearly €4,000 of a €5,000 target in just three hours.