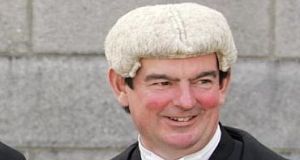 Mr Justice George Birmingham was TD for Dublin North-Central from 1981 to 1989 and served as a minister of state between 1982 and 1987. File photograph: Eric Luke/The Irish Times

Relations between the Independent Alliance and Fine Gael have further deteriorated following a heated argument over promotion of a former Fine Gael TD to serve as president of the Court of Appeal.

Minister for Justice Charlie Flanagan, Taoiseach Leo Varadkar and Attorney General Séamus Woulfe held a private meeting with Minister for Transport Shane Ross and Minister of State Finian McGrath early on Tuesday in an attempt to resolve the latest dispute over judicial appointments.

The dispute came to a head after the decision to appoint Mr Justice George Birmingham. The judge was TD for Dublin North-Central from 1981 to 1989 and served as a minister of state between 1982 and 1987.

It is understood Mr Ross and Mr McGrath said this was the last appointment the Alliance would sanction. Moreover, they expressed concern that their support was being taken for granted by their minority government partners, Fine Gael.

The Irish Times understands Mr Flanagan told the meeting he is Minister for Justice and should have authority to propose appointment of judges. He told Mr Ross there is and can be no veto on judicial appointments and that judges are needed to fill vacancies that arise.

It was claimed afterwards that Mr Flanagan threatened to resign as a consequence of the dispute. But he later denied this.

The Taoiseach told the meeting passage of the Judicial Appointments Bill was a key commitment for the Government. He gave the Alliance a “cast iron” guarantee that the legislation would be in the Dáil early next month and would pass through the Seanad by the summer.

The Bill would give a new body responsibility for recommending candidates to the Government for appointment to the bench. It would have a non-legal majority and a non-legal chair. The proposed legislation is a key commitment for Mr Ross in the programme for partnership government.

Mr Ross has stated publicly on several occasions that he will block judicial appointments until the Bill is passed. More than 30 judges have been appointed since the Government came to power in May 2016.

A Government spokesman said Mr Justice Birmingham’s appointment was made through an ad hoc process, whereby a four-person committee considered who should be appointed to the role. A similar process was used for the appointment of the Chief Justice.

Meanwhile, a meeting of Fine Gael Ministers heard strong criticism of Mr Ross. It is understood Ministers complained they were unaware of what the Minister was doing in his department and he did not inform them of decisions being made in their constituencies.

The Alliance is also in dispute over the position of Sean Canney, who went against the Government in the Dáil last night on a Bill to introduce tougher penalties for drink-driving.

It is understood members of the Alliance are to confront Mr Canney today and question him about his future in the group.

Waterford quays developers poised for Government funding decision 21:44
Dáil row over controversial mother and baby home legislation on commission records 21:30
Minister urges objectors to Cork flood relief plan to stop legal action 21:18
Man held after gardaí seize cannabis worth €800,000 in Dublin 21:10
People who throw house parties can be fined €1,000 and jailed for up to a month under new proposals 21:04