Martin Callinan sabotaged himself over two days of madness 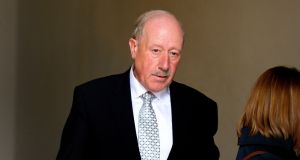 Former Garda commissioner Martin Callinan: undone by clumsy and wild efforts against a Garda sergeant who seemed to get under his skin. Photograph: Cyril Byrne

The findings of the Disclosures Tribunal in relation to former Garda commissioner Martin Callinan could hardly be more serious.

At every key point when Callinan’s evidence conflicted with other witnesses, Mr Justice Peter Charleton concluded the other person’s version was the truthful one.

That the evidence under oath of the former leader of the national police force has been dismissed as unreliable by a Supreme Court judge is profoundly depressing.

As grave is the tribunal’s finding that Callinan told several people Sgt Maurice McCabe was a child abuser, which is untrue.

In the tribunal’s report emerges a picture of two Martin Callinans. Neither picture painted by Mr Justice Peter Charleton is pleasant.

In one version there is a nuanced effort to do down McCabe.

Mr Justice Charleton says Callinan and his head of the Garda Press Office, Supt David Taylor, decided to use an historical – and dismissed – allegation of child sex abuse against McCabe.

This was done by mentioning the historical allegation, and engaging in “nodding and winking” about it in their conversations with people.

But, concludes the tribunal, when doing this they were careful to also tell people the allegation went nowhere and did not even constitute a criminal offence.

It was as if they wanted to raise the fact he was wrongly accused. And perhaps others might assume this was why he was blowing the whistle; anger at being accused in the wrong and then investigated by his own colleagues.

The other picture of Martin Callinan is of an almost frantic man.

He was doing the rounds outside a Public Accounts Committee meeting in January 2014, trying to convince those present McCabe was a child abuser.

Callinan had just appeared at the PAC himself. At one point, he referred to McCabe as his “subordinate”.

And he branded “disgusting” the whistleblower’s downloading of private penalty point information from Garda computers.

Outside the meeting, he told the Comptroller & Auditor General Seamus McCarthy that McCabe was “not to be trusted . . . that there were sexual offence allegations against him”.

At the same time, in the same public area of the busy building, Callinan spoke to committee member John Deasy TD in very derogatory terms about McCabe.

And Callinan the next day sought out PAC chair John McGuinness. He told him McCabe had sexually abused his own children and another person – none of which was true.

One incredible feature of the tribunal’s findings is that Callinan’s words represent almost the entire evidence for the conclusion that there was a campaign to malign McCabe.

The only other evidence is of Taylor hinting to three journalists there was more to McCabe than met the eye when those journalists made inquiries about rumours they were hearing.

Callinan did this to himself. And he did most of the damage over two days of madness; determined McCabe would not be given a public platform.

Yet he is an officer who rose to the top of An Garda through a brand of steady professionalism.

He was, for example, highly skilled at fashioning complex evidence and secret intelligence into successful prosecutions against criminals and terrorists.

But in the end he was undone by clumsy and wild efforts against a Garda sergeant who seemed to get under his skin.

Despite his protestations, Sgt McCabe was called before the PAC meeting in 2014; an appearance that gave significant impetus to his whistleblowing.

Around the same time, Taoiseach Leo Varadkar, then minister for health, said the whistleblowers were distinguished, not disgusting.

Those remarks by Varadkar buried Callinan another few feet. He was advised, on the day of his PAC appearance and afterwards, to withdraw the “disgusting” remark. But he never did.

He retired two months after the PAC hearings and has completely slipped out of public life. He continues to live in Glasnevin, north Dublin.

What becomes of him now is unclear. Nothing he said at the tribunal and none of its findings can be used against him in any legal process.

But if McCabe decided to sue on the basis of what the tribunal has found Callinan said about him, he could use the same witnesses in his case. This may all have a way to run yet.