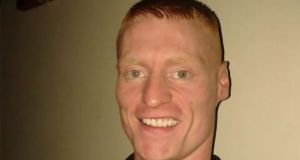 A man shot dead in West Belfast has been named as Raymond Johnston (28). He was gunned down in Poleglass around 8pm on Tuesday night.

He was targeted at a house in Glenbawn Avenue. An 11-year-old girl as well as the man’s partner were reportedly in the room at the time of the attack.

Detective Chief Inspector Geoff Boyce said: “Our thoughts are very much with his family and I condemn this horrendous murder. Raymond died after being shot just before 8pm last night.

“It is just unacceptable that someone would produce a weapon and open fire in any circumstances however it is particularly chilling that this attack took place in front of his partner and an 11-year-old child in his own living room.

“I would ask for anyone who has any information about this murder to contact police”.

He said he was particularly keen to hear from anyone who may have witnessed a male wearing a blue coat with fur around the hood make off from the scene. This man is understood to have got into a black car with tinted windows which drove away from the scene.

“While a definitive motive for the shooting has not been established we are exploring a number of possible lines of enquiry,” the detective said.

“Obviously as the investigation is at a very early stage I cannot expand further upon that at present.

“Local police will continue to maintain a presence in the area to provide reassurance to residents. We all have a part to play to ensure that the community in Poleglass has the time to come to terms with what has happened here and to ensure that those responsible for this murder are brought to justice.

“I would appeal to anyone who has any information, no matter how insignificant they may think it is, to contact detectives on the non-emergency number 101, quoting reference 1192 of 13/02/18 or ask to speak to Detectives at the incident room at Musgrave Street,” he added.

Alternatively, information can be provided to Crimestoppers on 0800 555 111.

Local Sinn Fein councillor Stephen Magennis said the community was outraged by the attack. SDLP councillor Brian Heading said it was a “monstrous” criminal act and reminiscent of violent scenes from the past. Alliance Party leader Naomi Long said it was a shocking murder.

Northern Ireland Secretary Karen Bradley said: “This horrific and sickening murder took place on a quiet, residential street as parents put their children to bed. “There is absolutely no place in society for those who carried out this brutal murder.” West Belfast MP Paul Maskey voiced similar views and said the whole community was sickened.

Local SDLP councillor Tim Attwood described the shooting as an “appalling and brutal murder of a young man”.

Speaking from the scene of the shooting he said neighbours were distraught and in shock at the shooting. Mr Attwood urged anyone with information to bring it to the PSNI.

Detective Chief Inspector Peter Montgomery said: “The male victim, who was in his late 20s, died after being shot just before 8pm.

“At this time we are working to establish a motive for the attack and are appealing for anyone with information which may assist us with our inquiries to contact us.”