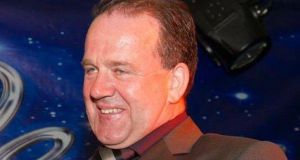 Jim Ferry from his “Justice for Jim” Facebook page. He says “you may have succeeded in putting me out of business, but I haven’t gone away you know”

The unit, which investigates suspected proceeds of crime, has seized the contents of a bank account held in the name of one of Mr Ferry’s relatives. It is understood that close to €300,000 was taken from the account, and is being held by the Garda Síochána.

Confirmation that CAB is chasing the assets of Mr Ferry has come from the man himself – on a new Facebook page, which he has apparently created and which operates under the moniker “Justice for Jim”.

Last August the High Court ordered Mr Ferry arrested and jailed indefinitely following his failure to comply with an earlier order of the court. This instructed him to clean up his 11-acre site at Rossbracken, east of Letterkenny in a Special Area of Conservation on the shore of Lough Swilly, on the Wild Atlantic Way.

Mr Ferry is a serial polluter with multiple convictions for illegal dumping since at least 1999.

In November 2016, Donegal County Council raided the Rossbracken site as part of a sustained clampdown on the illegal activities of two Ferry companies, Ferry’s Refuse Collection Limited (of which at the time Mr Ferry and a Mary Ferry were listed as directors) and Ferrys Refuse Recycling Limited (of which his daughter Louise Ferry was at the time listed as a director, along with Mr Ferry’s partner Carol Elliot).

At the time the waste businesses were the major collectors of domestic household rubbish in east Donegal. Ferry’s collections are now done by Wers Waste of Galway, operating as Wers Donegal, to whom Mr Ferry claims to have sold his business.

However, Mr Ferry failed to provide the High Court with evidence that the business was indeed sold, and will not say for how much or where the money is, as sought by the council.

During the November raid Donegal council inspectors, working with the Waste Enforcement Regional Lead Authority for the northwest, found an estimated 28,000 to 36,000 tons of waste buried illegally on the site, and several thousand more tons strewn about the land, lightly buried or stored in sheds.

Toxic liquids were oozing from buried waste onto the bank of a stream feeding the Swilly.

It is estimated that Mr Ferry pocketed some €3.36 million in fees collected from customers, money that was supposed to be used to defray the cost of lawfully disposing of the waste, either through landfill or incineration.

The council has estimated the cost of cleaning up the Rossbracken site to be up to €5.8 million.

In November 2017, the High Court gave the council authority to enter Rossbracken to inspect the main pit of buried waste and remove above ground waste. It is understood that some 3,000 tons was removed by a local contractor some weeks later.

When Mr Ferry failed to clean up the site as ordered, Mr Justice Max Barrett directed, on August 22nd, that he be arrested and taken to jail until such time as he complied with the order.

Shortly afterwards a large shed on the site went on fire. Bales of concrete blocks at the main entrance to the site initially impeded fire tenders entering to deal with the blaze. A second blaze broke out some weeks later.

Since the arrest and jail order, Mr Ferry has been on the run, and while some people in and around Letterkenny say they have seen Mr Ferry in the locality, gardaí have not been able to effect an arrest and he is believed to be using the Border with the North to his advantage.

It was said at the time locally that a substantial amount of other money, believed to be close to €300,000, was also seized from a bank account but this could not be confirmed at that time.

However, in a “Justice for Jim” posting last month, described as an open letter to Donegal County Council manager Séamus Neely, Mr Ferry accuses the council of being responsible for all that has befallen him.

You got the CAB involved, give them false information to get them involved telling them I had millions of euros which you knew not to be true

In an 870-word “letter” Mr Ferry charges that the council turned a blind eye to the alleged transgressions of other Donegal waste collectors and conspired to put him out of business.

“All this was designed to put me out of business.

“You got the CAB involved, give them false information to get them involved telling them I had millions of euros which you knew not to be true.”

Mr Ferry provides no evidence to support his assertions, and the Garda Síochána, in seeking to investigate crimes or suspected crimes, does not operate according to the diktat of a local authority or local government officials.

Donegal council said on Tuesday that as there were “ongoing legal proceedings, it is not appropriate to comment at this point”.

In his “Justice for Jim” page, and a separate more personal Jim Ferry Facebook page, Mr Ferry has adopted something of the persona of Donald Trump, referring to media outlets as purveyors of “fake news” and has also set up a Twitter account employing the Trumpian handle @Realjimmferry1.

Addressing what he describes as “my dear friends, followers and the good people of Donegal”, Mr Ferry says he “worked hard, paid my taxes”, only to be put out of business by Donegal council and “the fake news media”.

Railing against the courts and his critics, on “Justice for Jim” he accuses them of “hiding behind wigs and the fake news media”, and declares “you may have succeeded in putting me out of business, but I haven’t gone away you know”.

Mr Ferry declined to respond directly to The Irish Times, but wrote on social media that he expected the “fake news Irish Times” to do “a hatchet job on me in a propaganda piece”.