Man (23) appears in court over alleged hammer attack on puppy 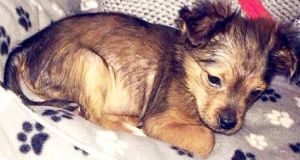 A row has broken out in a courtroom during the appearance of a man charged in connection with an alleged hammer attack on an 11-week-old puppy.

The 23-year-old man’s mother clashed with animal rights activists inside the court after angry remarks were shouted at her son.

Standing in the dock, Keegan simply nodded to confirm his name and the charge against him.

No details of the alleged attack were offered in court.

As he was remanded in custody, a number of animal rights activists shouted angrily at him.

Keegan was arrested on Tuesday after police were made aware that a puppy had been killed in an alleged hammer attack on Saturday at a flat in Ailsbury Park, Lurgan.

The officer in charge of the case told the court she believed she could connect Keegan with the charge.

No bail application was made, and Keegan was remanded in custody for four weeks.

During a discussion with his defence lawyer about a possible future bail application, District Judge Bernadette Kelly said there may not be a suitable address for him in Northern Ireland given recent coverage of the case on social media.

When Keegan’s lawyer said he was looking for an address outside Lurgan, Ms Kelly responded: “Somewhere about the Azores I reckon. Have you checked social media this morning?”

She added: “Social media extends from the west coast of America to the east coast of Japan. ”

The case was adjourned to March 2nd when Keegan will appear before the court via videolink. - PA