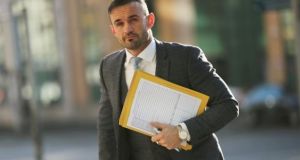 The solicitor caught with cocaine in his wallet at Mountjoy prison is one of the best paid criminal legal aid solicitors in the country, new figures show.

According to figures from the Department of Justice, Aonghus McCarthy’s practice has received €1.093 million (including VAT at 23 per cent) in criminal legal aid fees from the State over the past five years.

New figures from the department show that the Cork native last year received €287,460 in legal aid fees – putting him among the top 20 best-paid solicitors of the 850 solicitors to receive payments under the criminal legal aid scheme last year.

Mr McCarthy is set to escape a conviction for the possession of the €26 worth cocaine weighing 0.33 grammes at Mountjoy prison after a judge this week accepted the 32-year-old’s explanation that he did not know he was carrying the drug.

In a Garda interview, Mr McCarthy denied owning the cocaine, saying that someone else must have put it in his wallet. He said: “I do not do drugs and I would not risk the entirety of my career.”

Judge Gerry Jones said he would strike out the case next month if Mr McCarthy donated €1,250 to the Merchant Quay drug project.

A conviction would have jeopardised Mr McCarthy’s career as a solicitor.

The 2016 payments compared to €50,003 in 2013. Out of the fees received, Mr McCarthy has to fund the cost of operating an office including payments to staff.