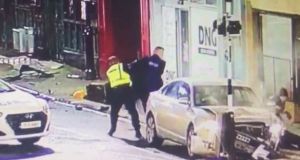 A still image from CCTV of a man being arrested in Castleblayney where a vehicle collided with a parked car causing the death of Stephen Marron. Image: Newsfile

The chief suspect for a car crash in Castleblayney on Tuesday night that left one man dead and a garda injured is due to appear in court in Carrickmacross, CoMonaghan this evening.

The suspect has been on the run from An Garda Siochána for eight years for an almost identical incident in which the same garda was injured.

Earlier on Thursday An Garda Siochána said a woman who helped a garda at the scene of the crash had come forward.

The chief suspect in the crash is a well-known criminal in his 30s from Keady, Co Armagh.

The man has been in custody since he was arrested after the crash.

The man who died, Stephen Marron (47), was sitting in his Skoda Octavia on Main Street outside a fast food restaurant for which he worked delivering food.

He died after a silver Audi A6 swerved into the back of the parked Octavia at speed.

The Octavia was spun around and hit a pole, killing Mr Marron with the force of the impact. The Audi came to a stop less than 100m further on after hitting another pole.

At that point, the Armagh man driving the Audi got out and was taken into custody by two gardaí.

The deceased was last night described as a family man and devoted husband and father. He served as assistant sacristan at Saint Mary’s Church, Castleblayney, and Saint Patrick’s Church, Oram.

Garda Michael Devlin, who was injured in the crash on Tuesday night, had managed to get into the Audi A6 with the suspect and was being carried in the car as a passenger when it crashed into Mr Marron’s car.

Garda Devlin was taken to hospital on Tuesday night but has since been discharged.

The Garda Síochána Ombudsman Commission (Gsoc) has begun an inquiry into the incident. The dramatic turn of events began when the suspect from Armagh walked into Castleblayney Garda station just before 11.30pm.

Gardaí believe he may have been checking on an associate who had been arrested on suspicion of drink-driving earlier that night and was being dealt with in the station.

However, gardaí in the station recognised the Armagh man as the suspect at large since the 2010 incident. Garda Devlin pursued him and, outside the station, managed to get into the Audi A6 with him, in an apparent effort to stop him driving away.

However, while the suspect was driving the car, with the garda as a passenger, it hit Mr Marron’s Octavia very soon after leaving the Garda station, killing him and injuring the garda in the suspect’s car.

In the Dáil concerns were expressed about the number of people “on the run” in the wake of the fatal crash in Castleblayney, Co Monaghan in which the chief suspect was the subject of an unexecuted bench warrant.

Mr Coveney said Minister for Justice Charlie Flanagan had sought a full report into the incident and would include the PSNI if necessary.

Mr Marron, was a keen sports fan and an active church member in the parish of Muckno, which comprises Castleblayney and nearby Oram.

Parish priest of Muckno, Canon Shane McCaughey, described him as a “loving and devoted husband and father, a son, brother, and a good friend to many”. “Stephen was the go-to-man for everyone in the community of Muckno parish,” he said.

“He was a disciple of Jesus Christ who asks his followers to love God and love neighbour.

“Stephen bore witness to his faith through the generosity and kindness that he showed to all who were in any kind of need.” - Additional reporting PA