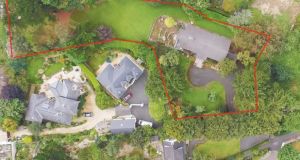 Dún Laoghaire Rathdown County Council has backed broadcaster Pat Kenny and his wife Kathy in their objection to plans for apartments and houses on a site adjacent to their Dalkey home.

The council has refused planning permission to Bartra Capital Property for the 19 apartments in three blocks ranging up to four storeys, along with five three bedroomed homes and two semi-detached homes, on the 1.4 acre site.

In their 16 page objection, the Kennys suggested grounds for refusal would be that the proposed development - by reason of its scale, height and design - would have an overbearing visual impact and be seriously injurious to the setting, amenity and appreciation of neighbouring properties.

In its comprehensive refusal, the planning authority echoed many of the reasons put forward by the Kennys.

The council said the proposed development “would seriously injure the residential amenities and depreciate the value of property in the vicinity and would thereby be contrary to the proper planning and sustainable development of the area”.

The planners also had concerns over the scale of Block B, stating that the proposed bulk, height and scale of that block relative to the adjoining site to the north would result in overshadowing and would appear visually dominant.

The planners said the proposed development, if permitted, would set an undesirable precedent for similar developments in the vicinity.

In a note attached to the refusal, the council said that aside from the reasons for refusal, it has other concerns regarding the proposal.

“In this regard, the applicant is advised that the planning report should be considered in full.”

Richard Barrett’s Bartra Capital now has the option of appealing the decision to An Bord Pleanala or lodging plans for a revised scale down development at the site.

Earlier this year, the property firm paid €3.17m for the Maple Tree House site adjacent to the Kennys’ home and also paid for an additional adjoining strip of land to allow the planning application be lodged last month.

The couple’s objection pointed out that their home, The Anchorage, abuts the subject site.It stated that if permitted the development “would detrimentally impact on The Anchorage” and other residential properties in the area and could ultimately seriously damage the character of the area.

“At the outset, Ireland is undergoing a housing crisis. Therefore, it is incumbent to realise the development potential of serviced-residentially zone land,” their objection said.

“However, as outlined clearly in the Dun Laoghaire Rathdown County Development Plan, any densification of brownfield lands must be balanced with respect for the receiving environment of established residential properties.”

The couple opposed the plan on a number of grounds - density, scale and massing, design, traffic impact, impact on trees and habitat and residential amenity.

Consultants for Bartra Capital Property told the council the houses are modest in size for the area and are either terraced or semi-detached.

They stated that the 19 apartments are generous in size and will provide an attractive and sustainable alternative for many residents in the area, particularly ‘empty nesters’ wishing to downsize from the larger family homes but wanting to remain in the area.

The consultants stated that the development will not have an adverse impact on residential amenities or views from the wider area.