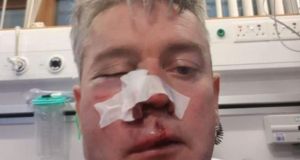 Gardaí have released three men and a teenager who were arrested in connection with an alleged assault on a soccer referee in Co Offaly earlier this month.

Two men in their 20s, one teenager and a man in his 40s were arrested on Wednesday morning.

They were questioned about the alleged assault of a referee at a soccer match in Horseleap on the Offaly/Westmeath border on Sunday, November 11th.

The refereee, 40-year-old Daniel Sweeney, was hospitalised as a result of the incident. He required surgery for injuries which included a fractured jaw.

The four males were detained under Section 4 of the Criminal Justice Act in Mullingar, Tullamore and Birr Garda stations in counties Westmeath and Offaly.

All four were released in the earlier hours of Thursday morning and gardaí said files are being prepared for the DPP.