Man in his 50s dies following shooting in Dublin 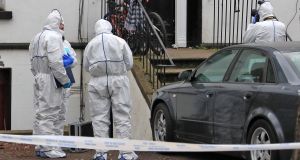 Gardaí at the scene of a fatal shooting incident on the North Circular Road, Dublin. Photograph: Colin Keegan/Collins Dublin

A man in his 50s has died following a shooting incident at a home in Dublin city on Sunday night.

Gardaí are investigating the “full circumstances” surrounding the incident. They have made no arrests so far.

Emergency services were called to the home on the North Circular Road in Dublin 7 at about 8.30pm on Sunday.

A Garda spokesman said the man had suffered “apparent gunshot wounds” and was pronounced dead at the scene.

His body remained at the home on Monday morning. The scene has been preserved for examination.