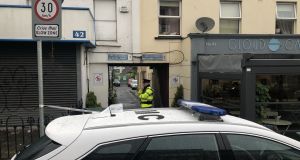 A garda at the scene of a fatal stabbing in north inner city Dublin. Photograph: Jack Power 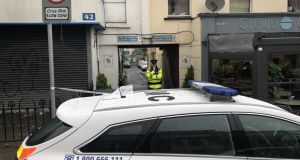 A garda at the scene of a fatal stabbing in north inner city Dublin. Photograph: Jack Power

A man (45) was stabbed to death at 4am at Clinchs Court, North Strand, Dublin 1. Gardaí were called to the scene, where the man was found seriously injured. He was taken to the Mater Hospital for emergency treatment but later died.

A second man who was injured is the individual arrested, according to Garda sources.

That man, also 45, had been taken to St James’s Hospital with non-life threatening injuries.

Gardaí arrested the man on Friday morning, and he is being detained at Mountjoy Garda Station under Section 4 of the Criminal Justice Act 1984.

The stabbing took place in or around a home on the street, and gardaí believe the incident is not feud related.

The scene has been closed off, and officers from the technical bureau are examining the area for evidence.

State Pathologist Dr Margaret Bolster is due to carry out a postmortem on the body later on Friday.

On Friday morning customers came in and out of a small cafe next to the cordoned-off street, while a stream of cars drove past into the city centre during the morning rush hour.

Achim Unland (37), originally from Germany, has lived in a house on the street for around a year with his fiancée.

He described the small road as always “pretty quiet”, with many people in the area renting.

“I haven’t heard anything like this – there is even a local community garden in the back there, it’s usually nice,” he said. Mr Unland said he heard no sound of any disturbance earlier this morning.

On Friday morning he went outside to find gardaí “all over the place” by one of the homes on the street.

Gardaí are appealing to any witnesses who may have been in the area between 3am and 4:15am on Friday to contact them.

They also asked for any taxis with potential dash cam footage to contact Mountjoy Garda Station on 666 8600 or the Garda Confidential Line on 1800 666 111.