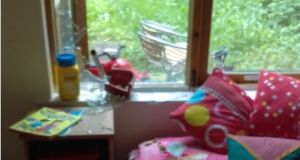 The missiles smashed the window of the bedroom at 1.30pm, a time when baby Saara Uddin usually had her afternoon nap.

Gardaí in Kildare are investigating an alleged racist attack in which the bedroom window of a baby girl was smashed with an iron bar.

The seven-week-old girl only avoided serious injury because she had been moved to sleep in a different room.

The ten-foot iron bar, followed by a large piece of wood, smashed the window of the bedroom at 1.30pm, a time when baby Saara Uddin usually had her afternoon nap. She had been moved to another room because plumber Tom McHolmes was working in her bedroom.

Saara’s dad Jashim Uddin said he was “standing talking to Tom when the iron bar smashed through just missing the pair of us”.

“We were both in shock, and the next thing a big lump of wood whizzed by our heads and through the window as well,” he said.

Mr McHolmes said after the bar came through he asked Mr Uddin if anything like that had happened before.

“He said it had. I just thought it is not fair that they have to live like this and took off in the direction of where the things had been thrown from,” he said.

The alleged culprits were inside a security fence that surrounded a derelict building.

“I could see five lads in there laughing but the laugh went off their face when I scaled the thing and started to chase them.”

He said “they didn’t seem to fancy the odds and ran”.

“I managed to grab one and pinned him down, he wasn’t so brave then, he kept saying ‘I didn’t do it my mates threw them’”.

He said he had already dialled 999 at that stage and handed the teenager over to gardaí when they arrived.

Mr Uddin, who is originally from Bangladesh and is now an Irish citizen, lives with his wife Shamima and their sons Shabir and Shadid in the house. He said Mr McHolmes was “ like Superman when he got going”.

“We have been attacked before and our neighbours houses have also been struck with missiles, but I actually think they were intended for us,” he said.

“These guys were so lucky as Tom was finishing up in that particular room and had they attacked say half an hour later our baby would have been in there. Somebody was looking down on us as a family that our beautiful daughter wasn’t killed, these thugs didn’t care whether she was or not.”

In a statement, gardaí said they were aware of the incident and an investigation was ongoing.

“A male in his late teens was arrested and has now been released,” it said. “A file is now being prepared for the Director of Public Prosecutions. No injuries were reported.”

Cllr Fintan Brett said local gardaí had given the members of Naas Municipal Council a briefing earlier this week about trouble in the area.

He said there were many Asian families living in the estate and there had been a lot of anti-social behaviour especially since the school summer holidays started.

“There’s been a few of these incidents and we had a briefing from the gardaí about it. They are aware that this is going on and they are mindful of what is happening there,” he said.