Barbecues and a picket fence: Finland shows off its liberal prison system

Does Suomenlinna Island jail hold the secret to having EU’s lowest imprisonment rate? 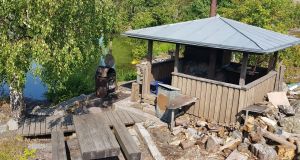 Barbecue area in Helsinki’s Suomenlinna Island prison: Most prisoners spend the day restoring and maintaining the fortress for €8 an hour or attending courses in the city. Photograph: Conor Gallagher 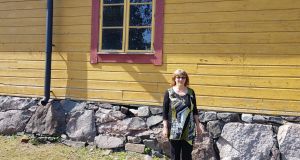 “Tourists get curious. Sometimes they wander in,” says director Sinikka Saarela with a smile. This is because the prison is located within Suomenlinna Fortress, a Unesco World Heritage site and Finland’s most popular tourist attraction.

It is not very hard for tourists to get in or for any of the prison’s 100 inmates, or “clients” as officials call them, to get out. The only barrier is a 1.5m picket fence and then it is just a short ferry ride to the city. But escapes are rare.

“I’ve escaped from other open prisons,” says one inmate who is serving his fourth custodial sentence and who asks not to be named. “But I haven’t escaped from here. I don’t want to mess up what I have.”

Most prisoners spend the day outside the fence anyway, restoring and maintaining the fortress for €8 an hour or attending educational courses in the city.

“It’s hard work but for prison it’s not a hard life,” says Gerry, an inmate working in construction, as a column of the prison’s resident geese waddles past.

In the evenings, prisoners can use the library, have a barbecue or lift weights while overlooking Helsinki’s beautiful bay.

Suomenlinna Prison is the jewel in the crown of Finland’s penal system, and officials will spend the six months year showing it off to European politicians as part of the country’s presidency of the EU. Minister for Justice Charlie Flanagan has said Ireland can learn from the Finns’ example. *

About 58 per cent of Irish prisoners reoffend within two years of release, compared to 40 per cent in Finland.

Finland is a proud subscriber to the Nordic model in all areas of life including its penal policy. Nineteen of its 26 prisons are small, open facilities. One in every three prison beds is in a open facility.

By comparison, Ireland has two open prisons, making up 6 per cent of total prison beds.

Finland can have such a liberal regime because the public supports it; open prisons have been in operation here since just after the second World War, a decade before the UN defined the concept in writing, the prison service’s director general Esa Vesterbacha explains.

“There are voices calling for harsher sentences but in general the current approach is popular.”

This is helped by Finland’s low crime rate. Despite having the fourth-largest number of gun owners in the world, it has one of the lowest murder rates.

However some public officials quietly express concern that public acceptance of the Nordic model might be on the wane. A significant increase in sexual crimes has caused much public debate with some popular far-right groups blaming it on the massive influx of people to Finland during the 2015 migrant crisis. This may be related to another worrying trend; hate crime is also on the rise. There were about 90 racially motivated incidents last year, although most were relatively minor.

And Finland continues to have one of the worst records in Europe for domestic violence, although one official suggests this is because Finnish women are more likely to report it than in other countries.